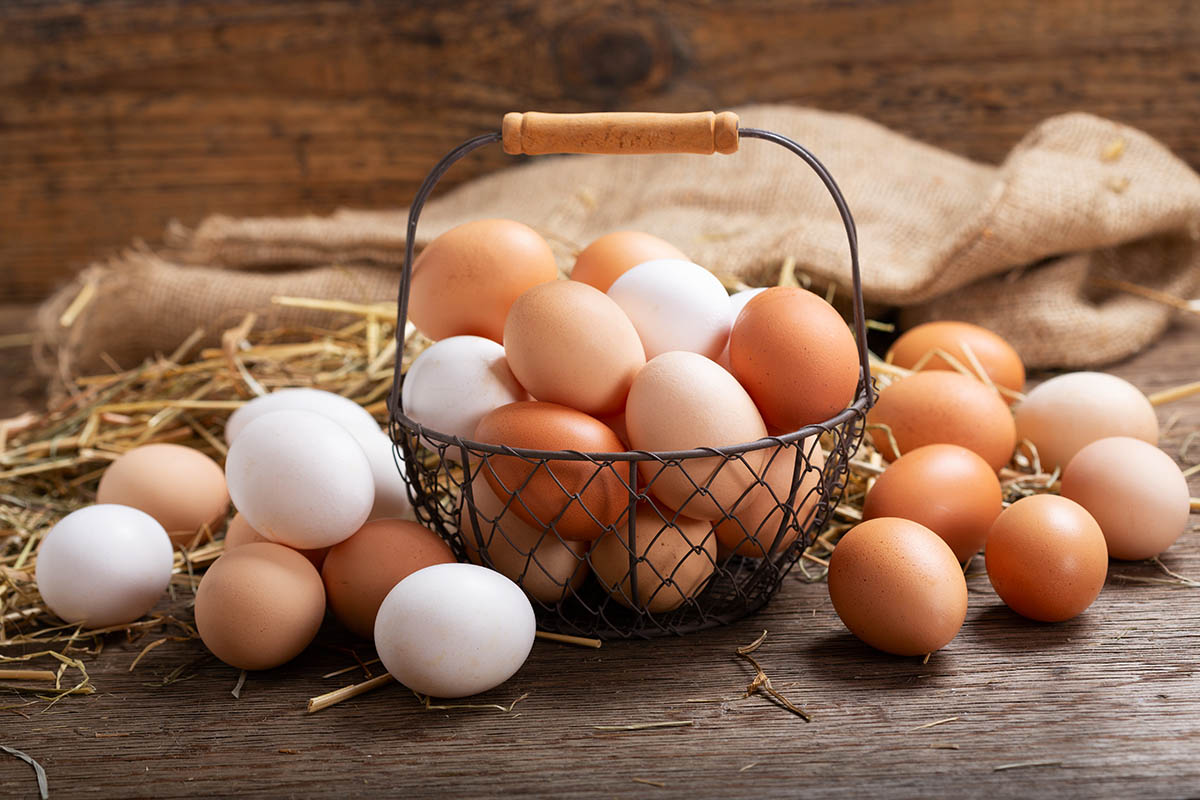 Trying to think of a list of foods that start with the letter E but drawing a blank? You’ve come to the right place!

Whether you’re trying to stock up on your general knowledge for a quiz, or are looking for inspiration in the kitchen, this list of 27 foods beginning with E has you covered.

Chances are that you’re already familiar with the majority of these foods. Here’s a quick reminder for you of foods that start with the letter E! We bet you know of more than you think. The Earth nut is better known by its other name - the peanut.

This nut isn’t actually in the same family as tree nuts such as hazelnuts or walnuts, and actually grows underground.

Peanuts are a versatile legume that can be used in both sweet and savory recipes. The Earth nut is a favorite snack on its own, and is often salted. Peanuts are also made into a spread, which pairs well with jelly in a sandwich. 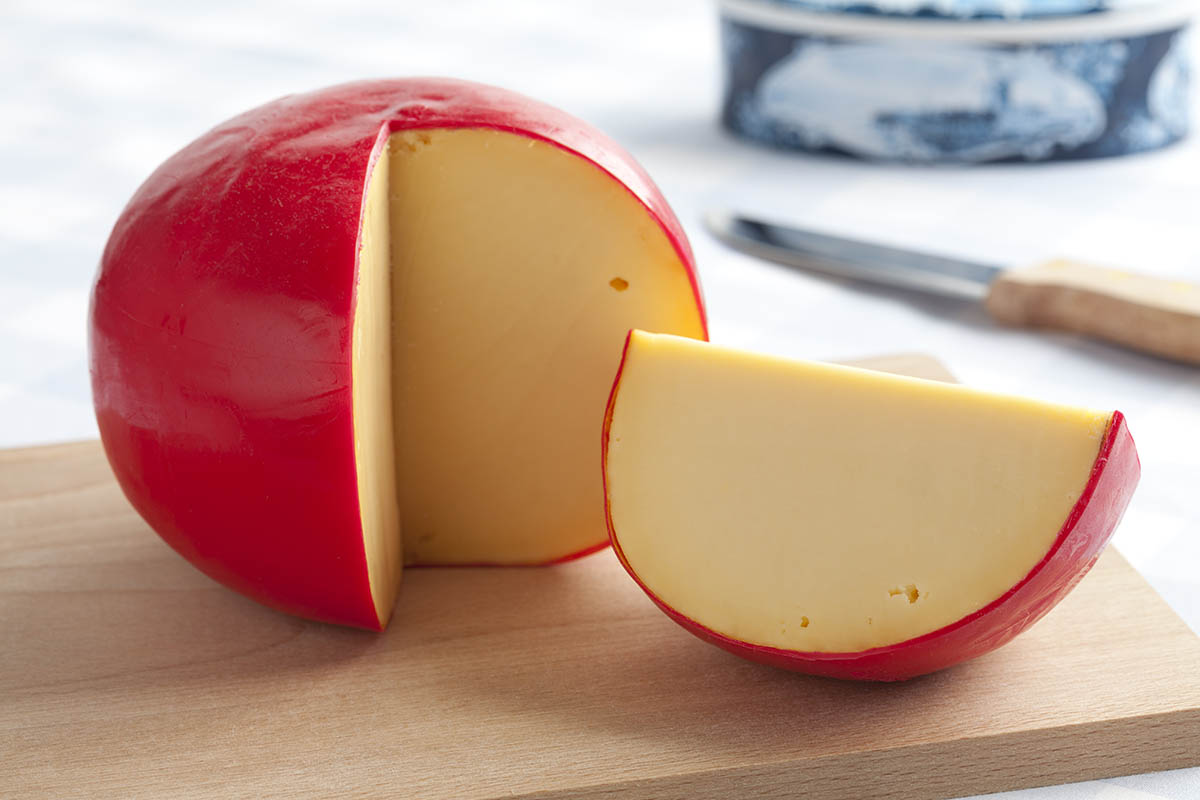 This tasty French dessert needs no introduction. The eclair is a long pastry made using a choux bun, which is filled with cream and topped with chocolate icing.

Originating from French patisseries, eclairs are now a favorite dessert across the world. Eclairs are made with the same type of pastry that’s used for making profiteroles. 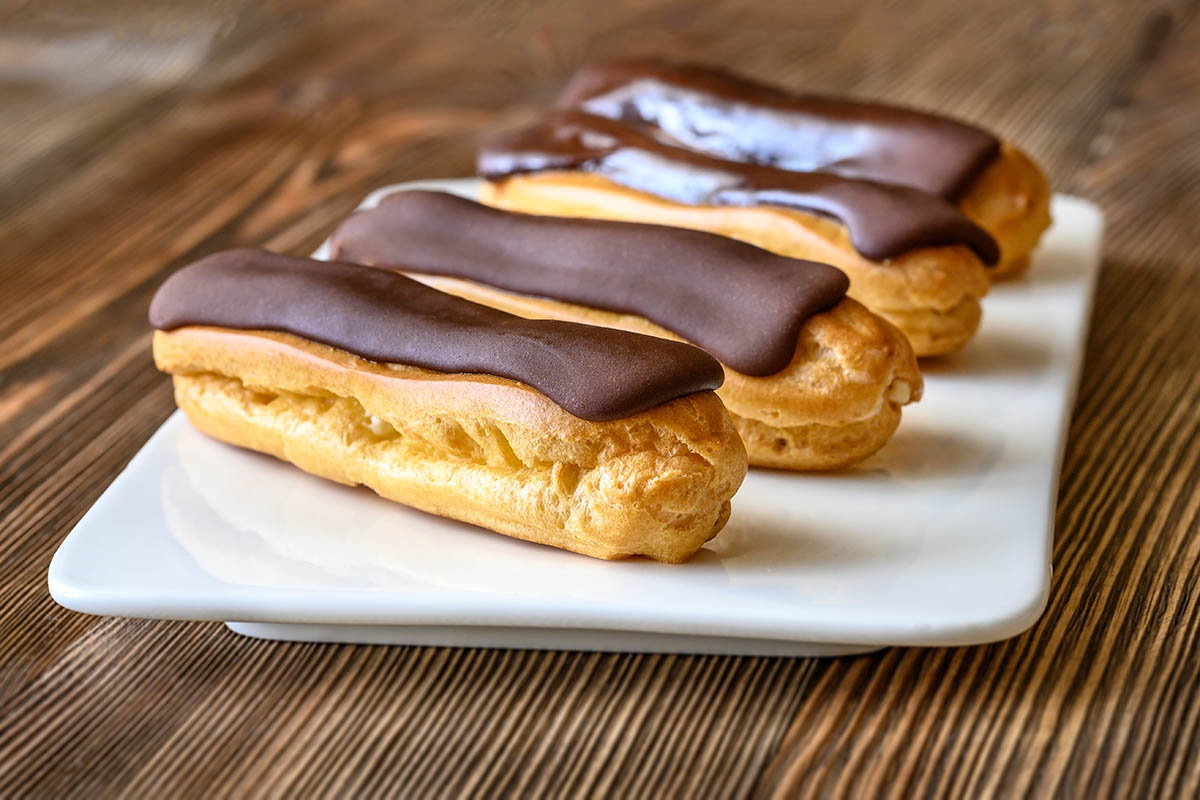 This particular cheese originates from the Netherlands. Edam is a creamy cheese which is then covered with red wax rind to keep it fresh.

This can be served with crackers, or used in a variety of recipes. It also tends to pair well with fruits such as apricots, peaches, and cherries. It keeps really well for several weeks without spoiling. 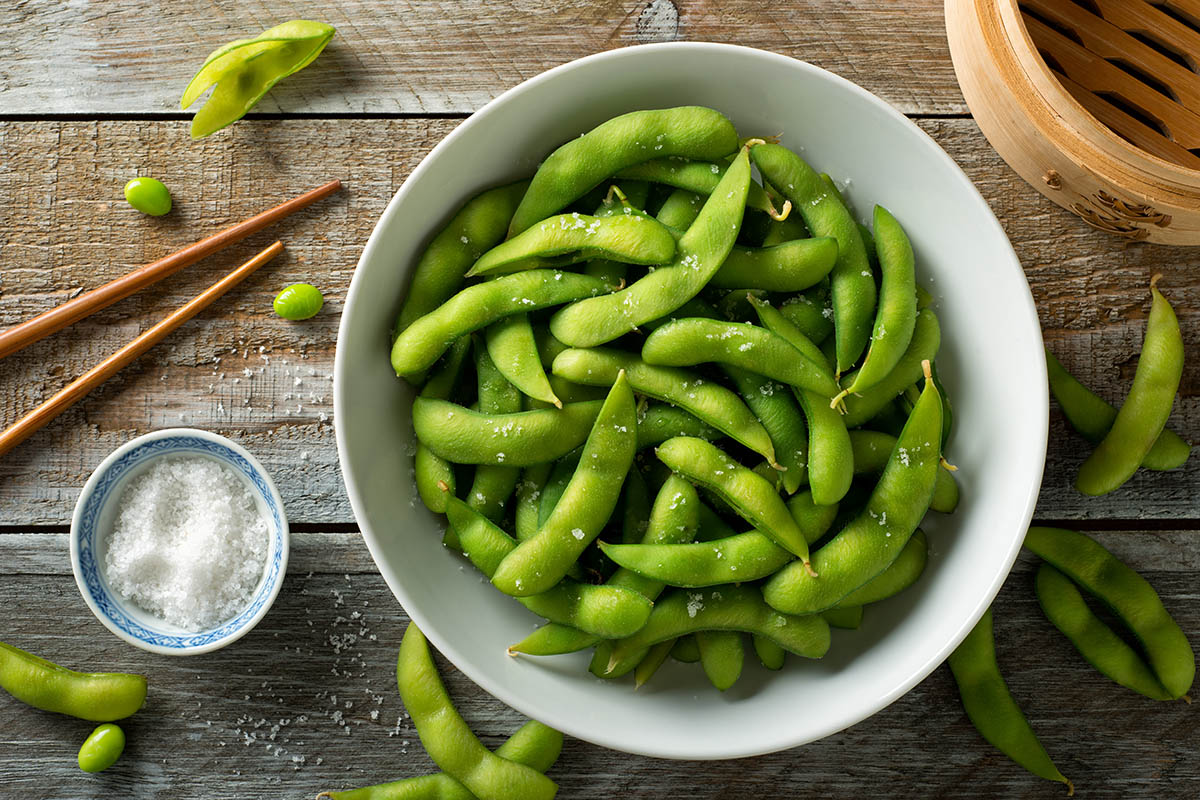 Edamame is a tasty snack that’s super easy to prepare. These are basically immature soybeans which have been blanched in slightly salted water.

You tend to squeeze the edamame beans from their pods, then discard the shells themselves.

Remember not to bite into the pod, otherwise you’ll be greeted with a bitter tang! These can be eaten both cold and hot, and are naturally high in protein. 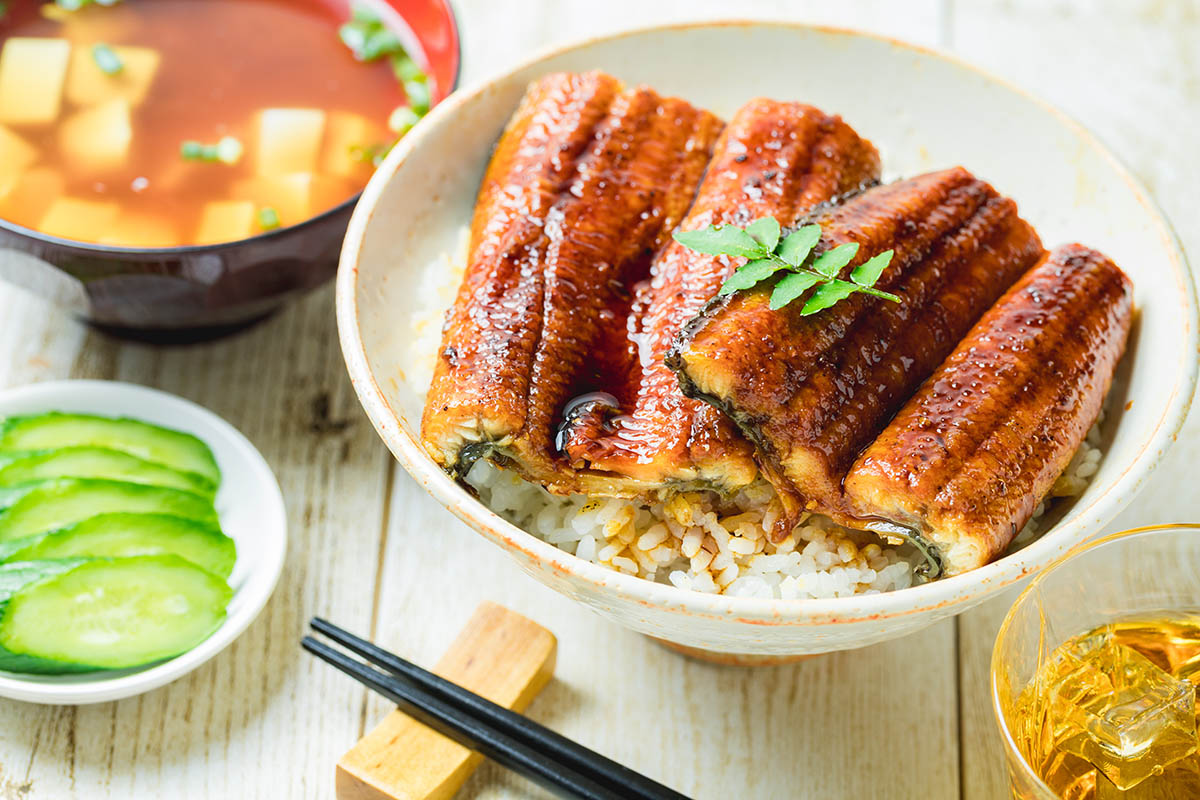 Want to try something more adventurous? Then why not opt for a plate of eel!

This is a staple in many cultures around the world, and works well when paired with ginger, soy sauce, and wasabi. You can often find eel as an ingredient in sushi, too. 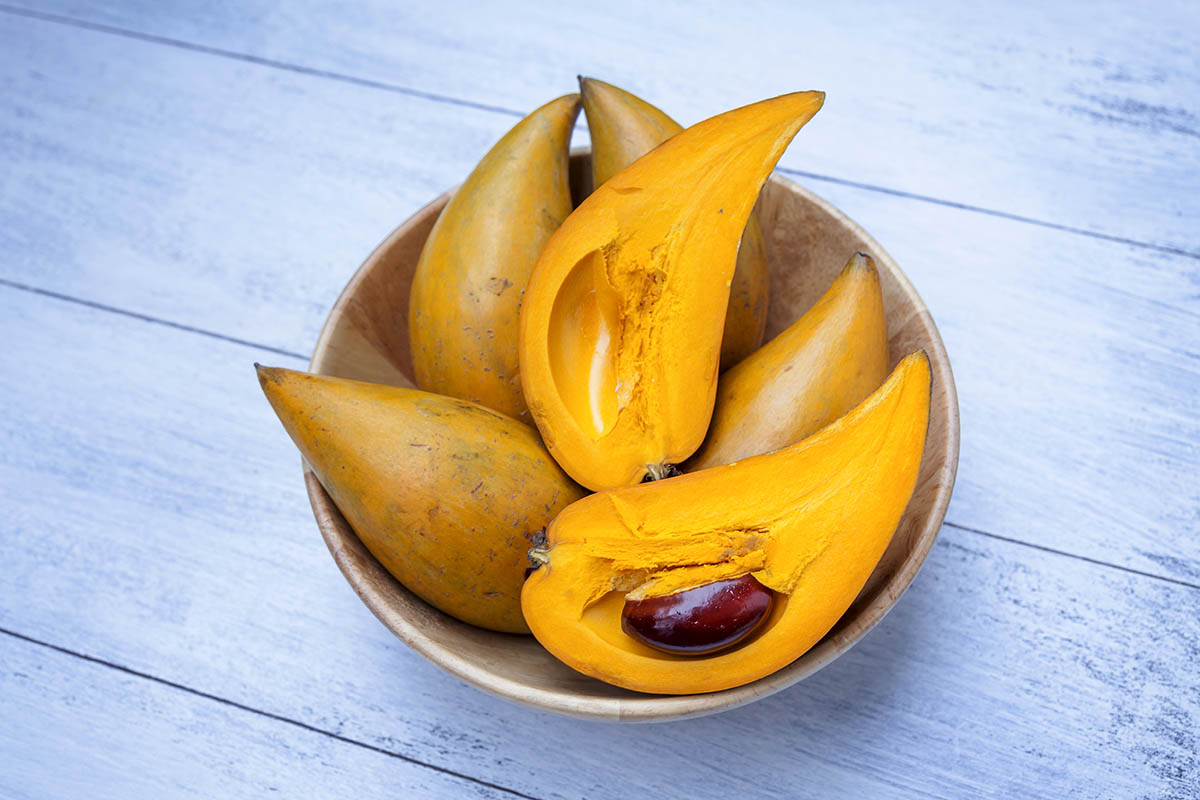 Native to southern Mexico, egg fruit has a unique taste that is often compared to the yolk of a hard boiled egg.

Hence the name! This fruit can be eaten both cooked and fresh, and can even be used to make jelly. Many indigenous areas use it to top pancakes. 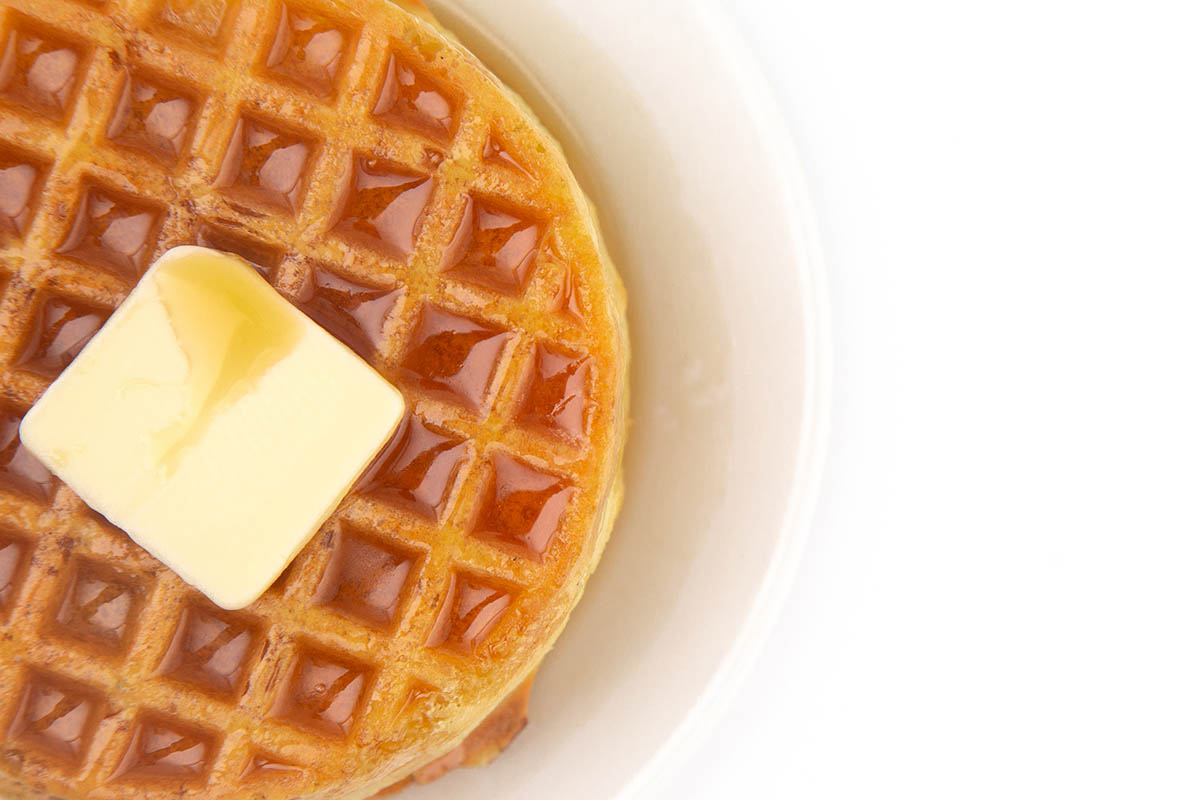 These waffles are a popular choice for those who need a quick breakfast.

They tend to be popped in the toaster, and can then be smothered in butter and maple syrup. This gives you a tasty treat that can be demolished quickly.

The butter and maple syrup will gather in the crevices of the Eggo waffles and make them taste even better. Why not add a layer of jelly for a real breakfast treat? 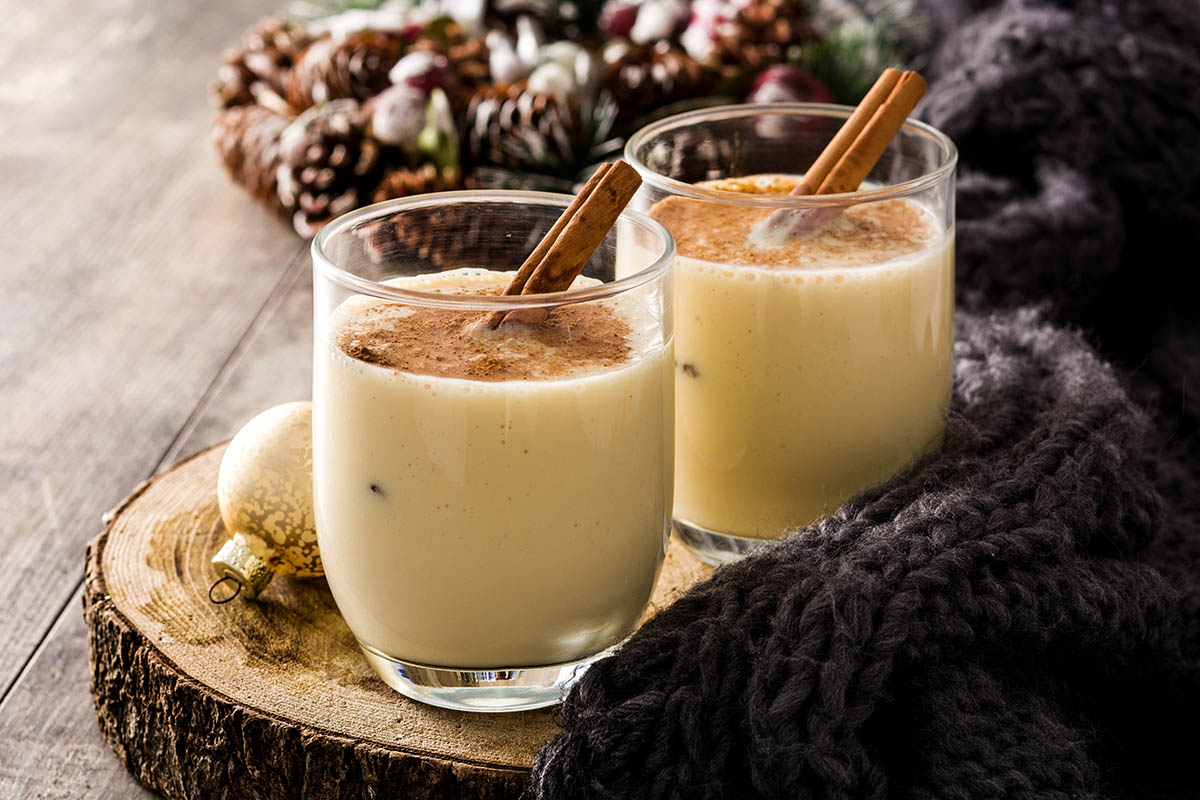 Known as a Christmas drink, eggnog is a creamy, rich drink that is often served during the holidays.

Eggnog pairs well with a plate of warm cookies that have been served up fresh from the oven.

Some families will even leave a mug of eggnog out for Santa on Christmas eve to give him a little boost in between stops! It’s often used in recipes such as ratatouille, eggplant bakes, or even in pasta sauces. Eggplant can make a great side dish or even be the star of the plate on its own. 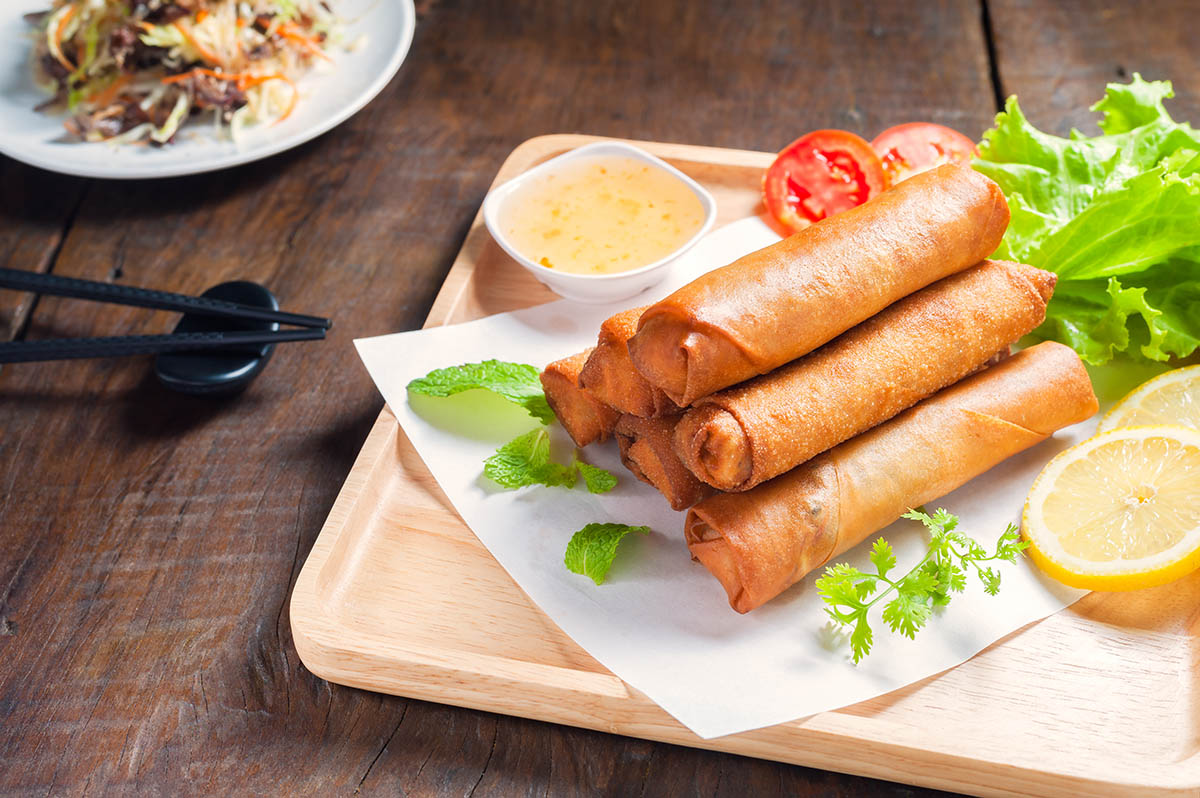 Fans of Chinese food will love to add some eggrolls to their order. This is a deep fried appetizer which can be either vegetarian or filled with ingredients like chopped pork.

The best types of egg rolls have a beautifully crunchy exterior, with scrummy cabbage and other ingredients inside. Why not give one a try the next time you grab a Chinese takeaway? 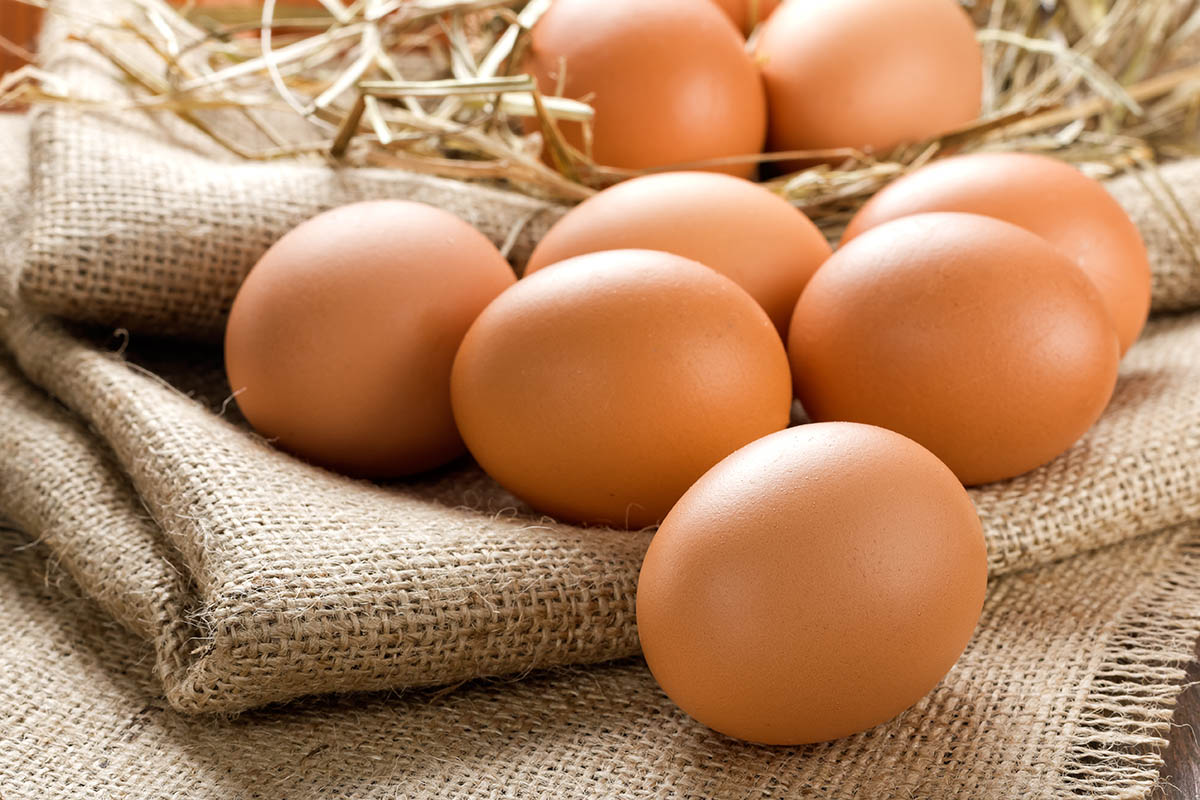 The question of whether the chicken or the egg came first will keep people arguing until the cows come home. However, the usefulness of eggs themselves can’t be up for debate.

These tasty morsels can be fried, scrambled, and poached but to name a few cooking methods. Eggs are also widely used as a binding agent in cakes and other culinary dishes. 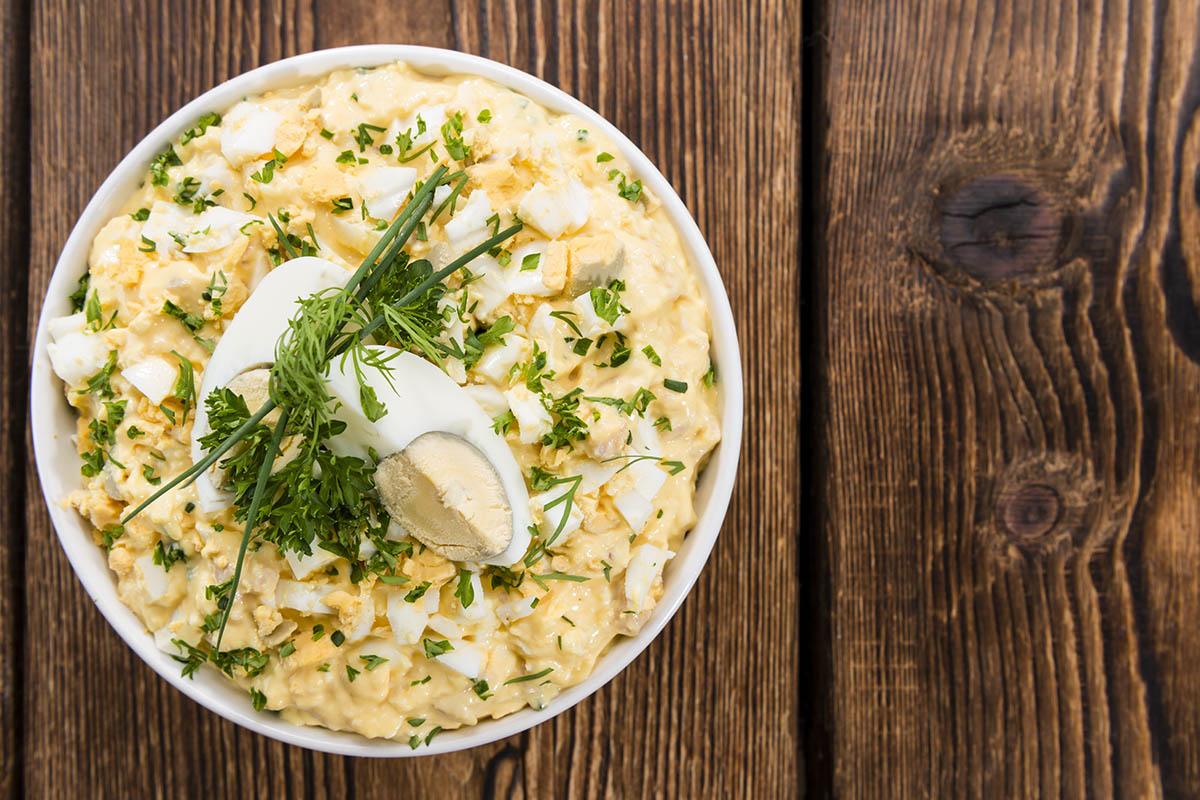 Egg salad is the go-to sandwich filling for many! A hit with both vegetarians and meat eaters, egg salad is a quick and easy filling that can be made in a pinch.

It’s super easy to make - simply make sure to boil your eggs in plenty of time. Slice them up and add some mayonnaise to the mixture, and it will be ready to go!

You could even add some cress leaves to the egg salad mixture to give it a little bit more crunch. 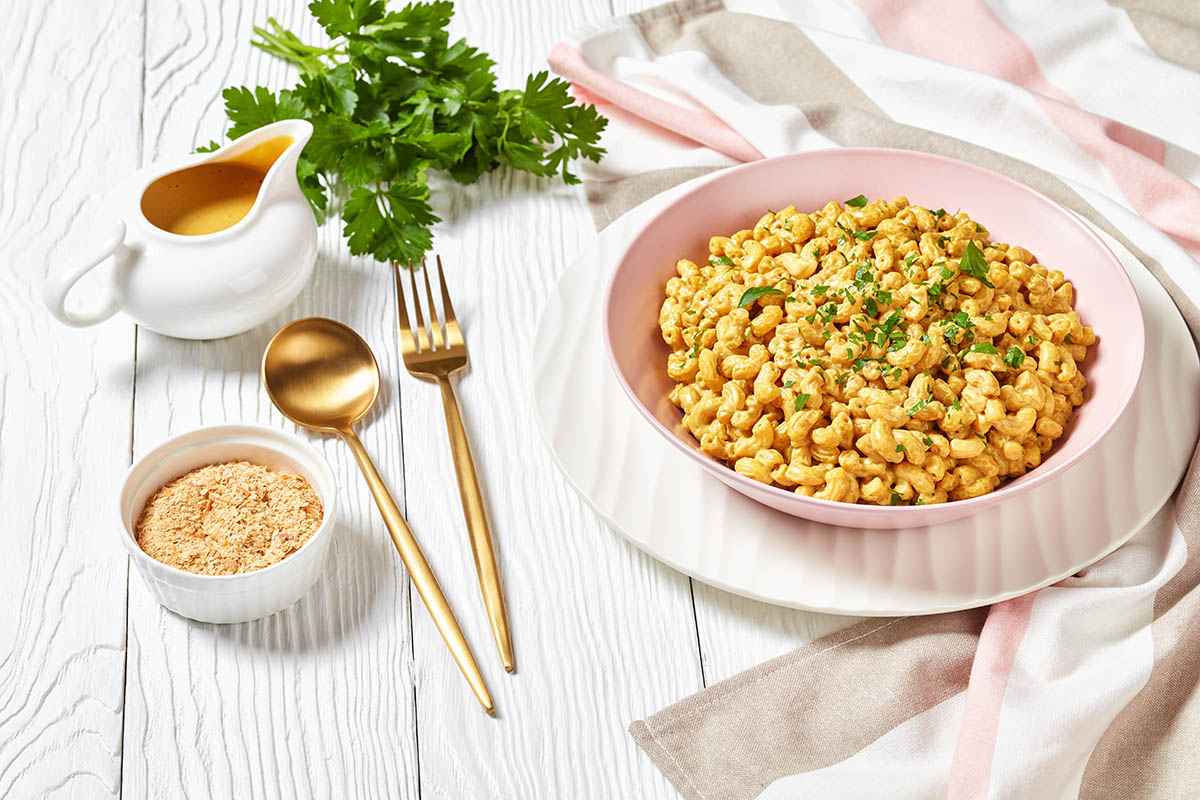 This is a dish that can be whipped up quickly, so it is perfect for those who don’t have a lot of time to cook during the day. 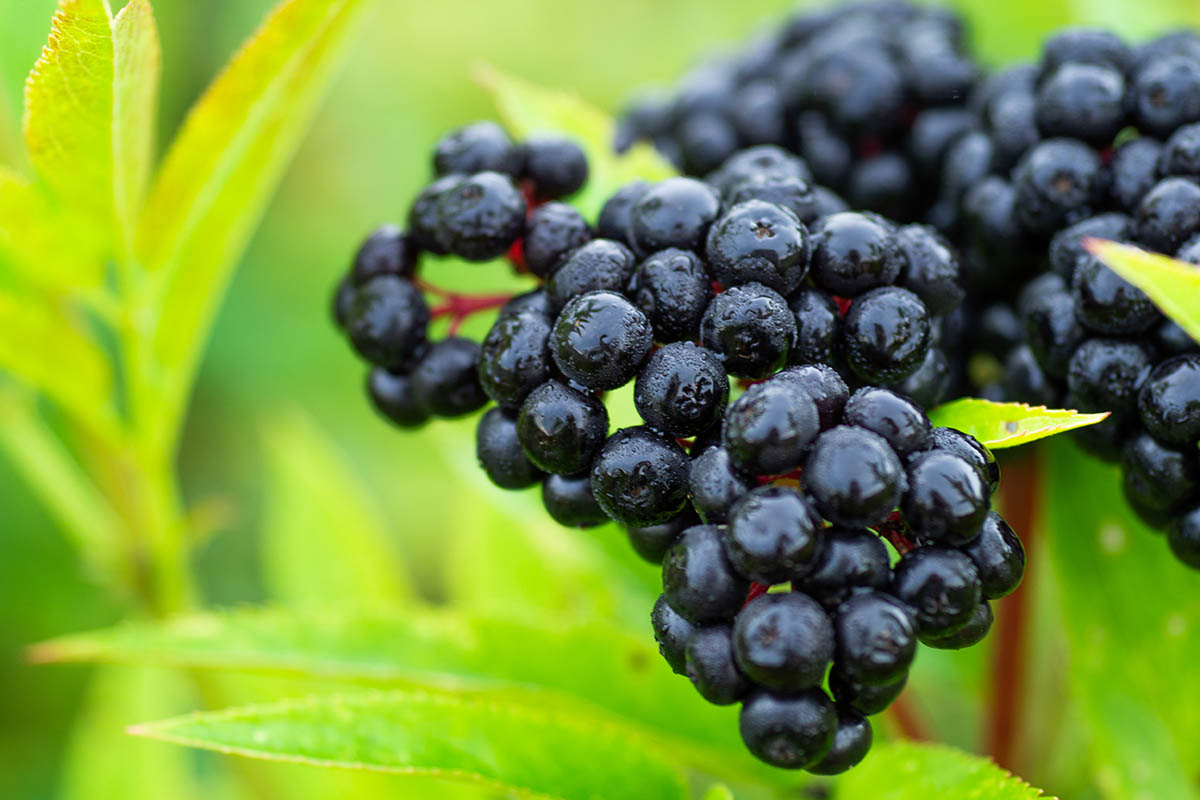 The elderberry is well known for having great medicinal properties. This berry tends to grow wild in several different habitats, and is packed full of great minerals, vitamins, and antioxidants.

The elderberry is a member of the honeysuckle family. It smells sweet, and its scent can often be smelled during the summer months. 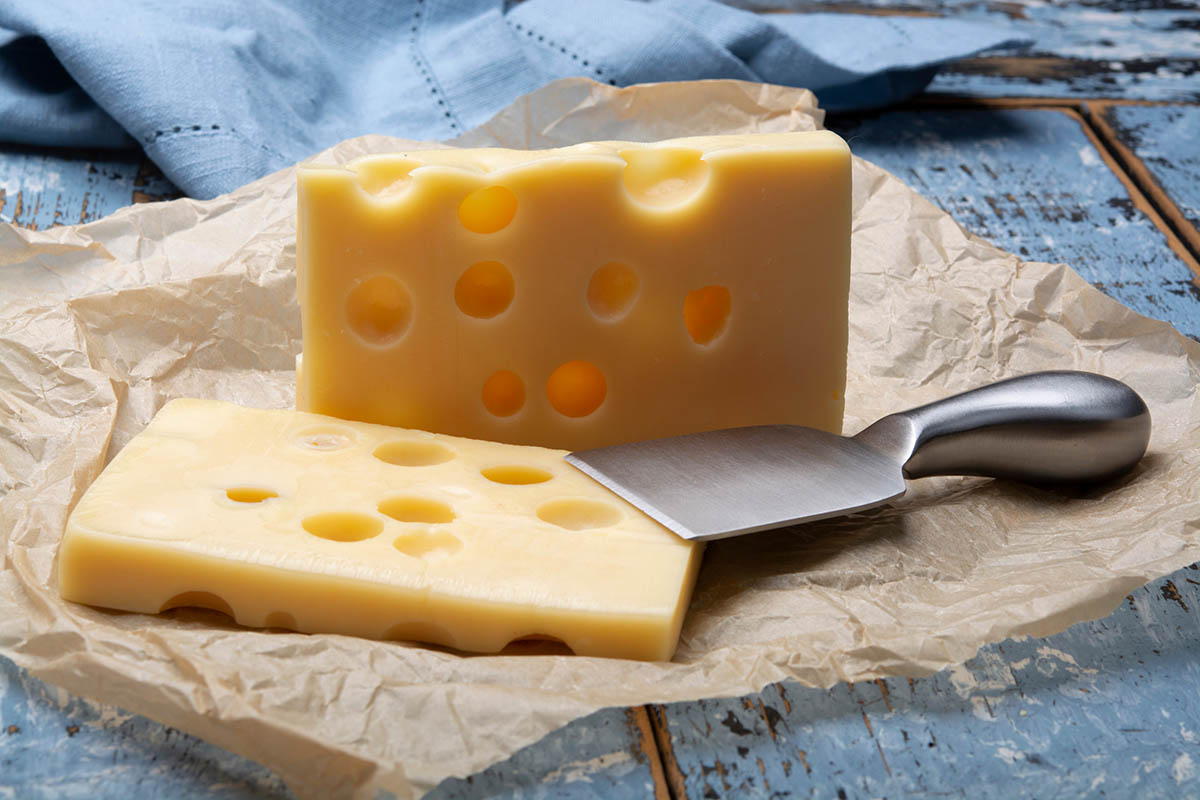 This classic Swiss cheese is popular in fondues or is even served with crackers and a glass of wine. Emmental cheese has a sweet, nutty flavor, and is one of the most popular cheeses across the globe.

This particular cheese is recognized for its noticeable holes. These are created during the cheese making process, and are where the bubbles of gas settle during the fermentation process. 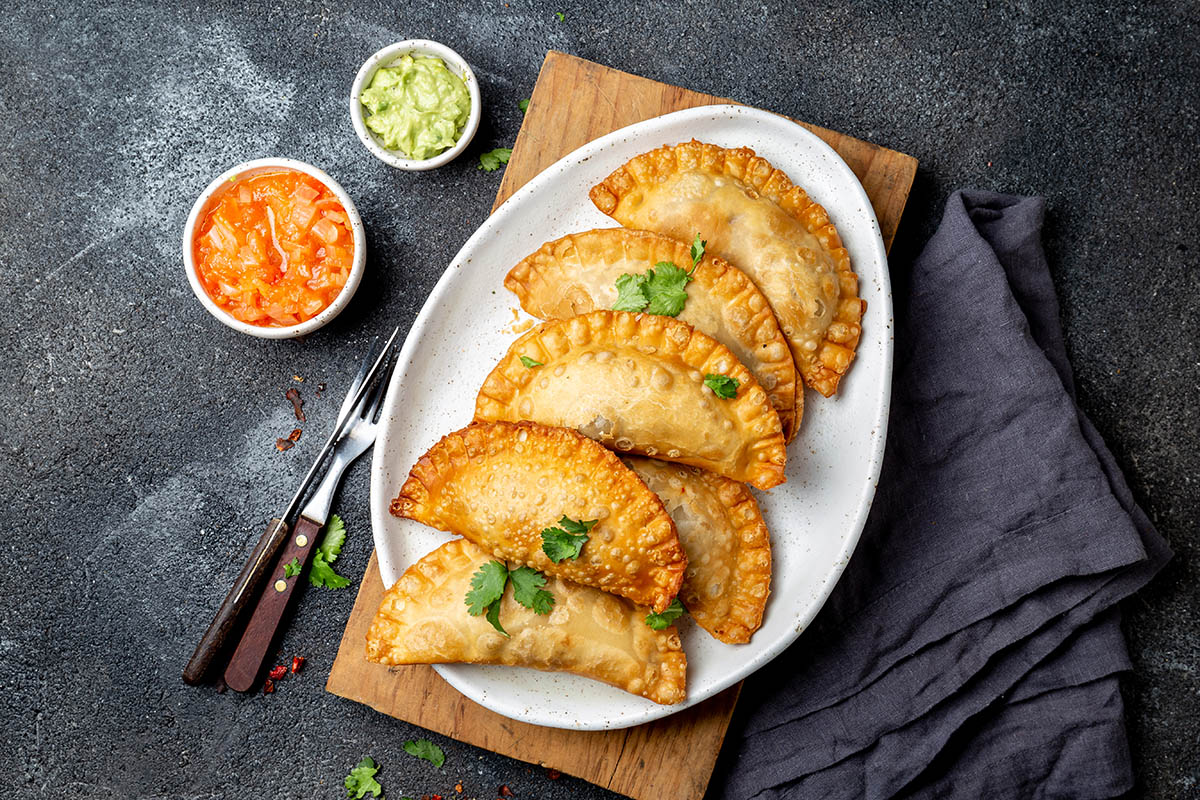 Empanadas are versatile pastries originating from Spain. These can be filled with either sweet or savory fillings, depending on your preferences.

One of the more popular sweet fillings is apples and cinnamon. A lot of people tend to opt for the more savory beef and vegetables.

The emu apple originates from Australia. Often called native cranberries, this fruit is roughly the same size as a nectarine.

It can be an acquired taste, but has a similar flavor profile to a spiced apple. Emu apples can be eaten fresh, but they are also used in a variety of sweet and savory recipes. 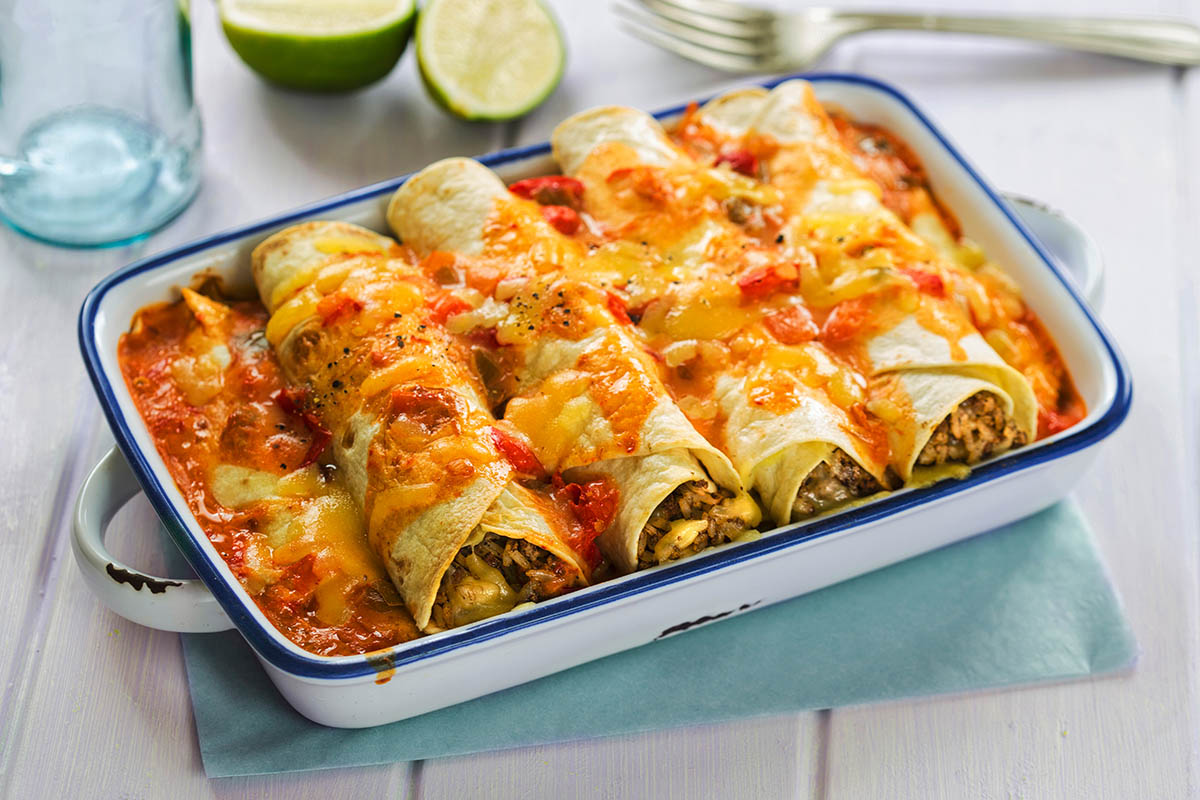 There’s nothing quite like a tasty enchilada to satisfy your Mexican food cravings.

This dish usually features chicken as the main ingredient, combined with cheese, tomato sauce, peppers, and a variety of spices to give it a little extra punch.

Enchiladas are the perfect dish to have at lunchtime or even as a tasty dinner for all the family. 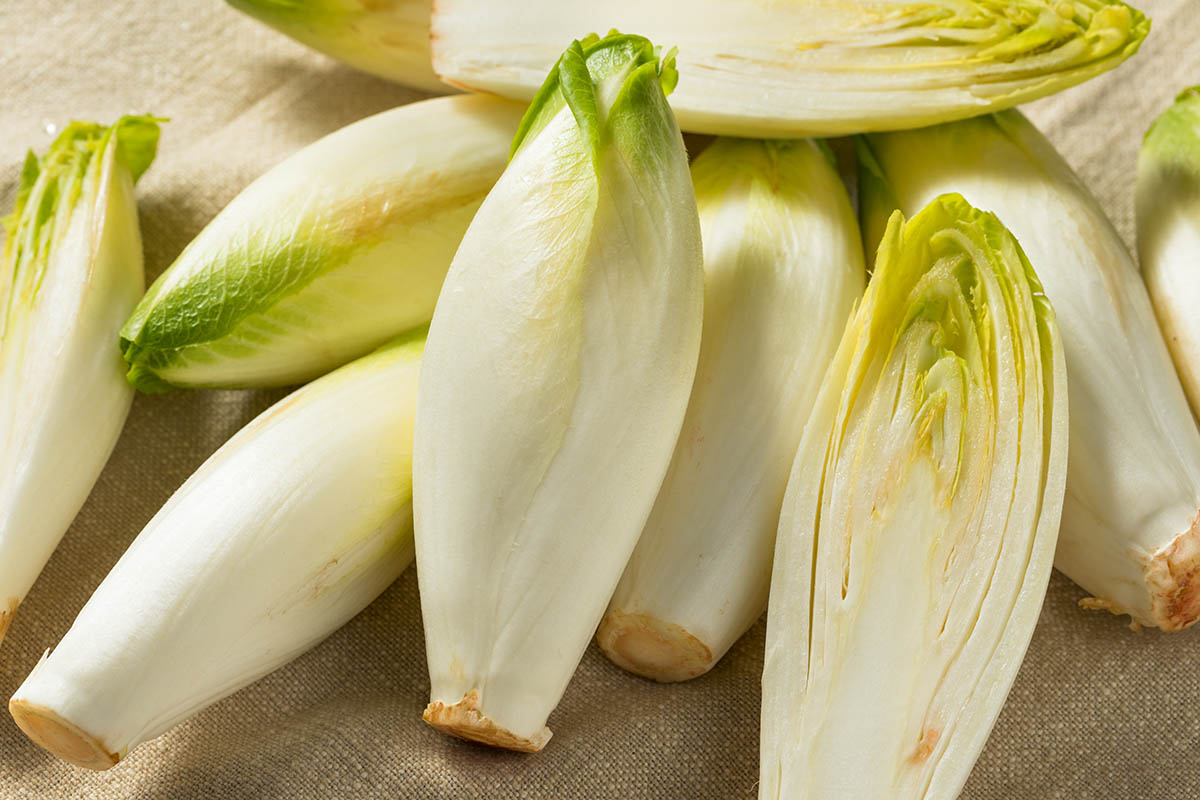 This leafy green is a close cousin of escarole, another food beginning with the letter E. Endive is bitter when eaten raw, and gives off a slightly nutty taste when it’s cooked.

You can remove some of the bitterness of the endive by placing it in a pan of boiling water for a minute or two.

Once cooled, you can add it to your favorite salads to give them a bit more crunch. It pairs well with carrots, chickpeas, and tomatoes. Popular on the breakfast table, the English muffin tastes great when it’s toasted, topped with a layer of butter, and another liberal layer of jelly.

English muffins give you a quick meal when you’re on the go because they’re super simple to toast. These make a great breakfast for those who need something fast when they’re on their way to school or work! 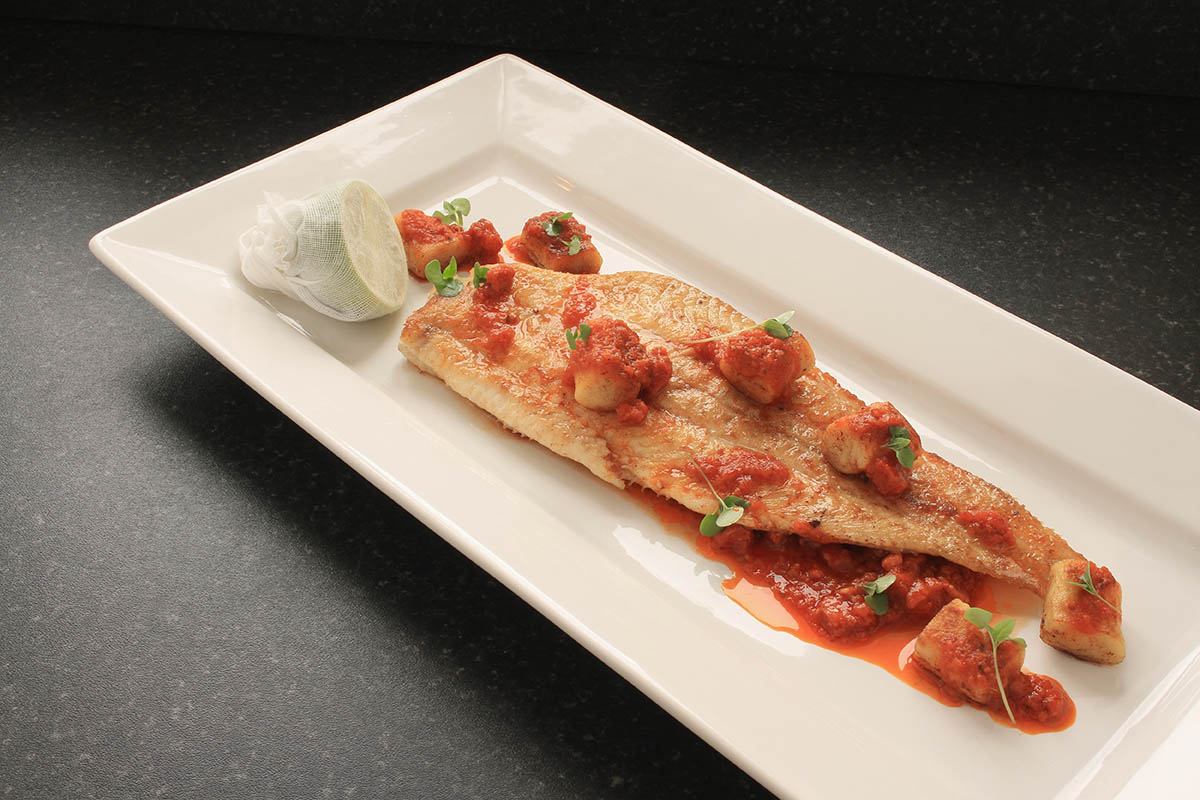 This tasty fish is a delicacy around the world. English sole works well with several different sauces, and pairs well with rice and steamed vegetables.

English sole is a good source of lean protein. This tasty flatfish tends to be farmed off the coast of Washington, California, and Oregon, and is very important to commercial fishing. A favorite snack for many, the English walnut is a crunchy, slightly bitter tree nut that is a great source of protein. English walnuts are also packed full of healthy fats as well as essential vitamins and minerals.

These tend to be used as a snack with other nuts, or packed into salads and stuffings for an extra crunch.

Also known as the false banana, enset is a fruit from the banana family located in the equatorial regions of Africa.

Enset tends to cope well with droughts, making it the perfect fit for its native land. Unlike its cousin the banana, enset isn’t grown for its fruit.

The edible part of the plant is in its vegetative body. When fermented it gives you edible parts which are considered a delicacy. Escargot is a classic French dish of land snails. This is a dish that gets a bad reputation, however, it’s something that should be tried at least once by everyone.

Escargot is a dish that can be found in many restaurants across France. If you’re feeling adventurous, you could even try and cook escargot at home. 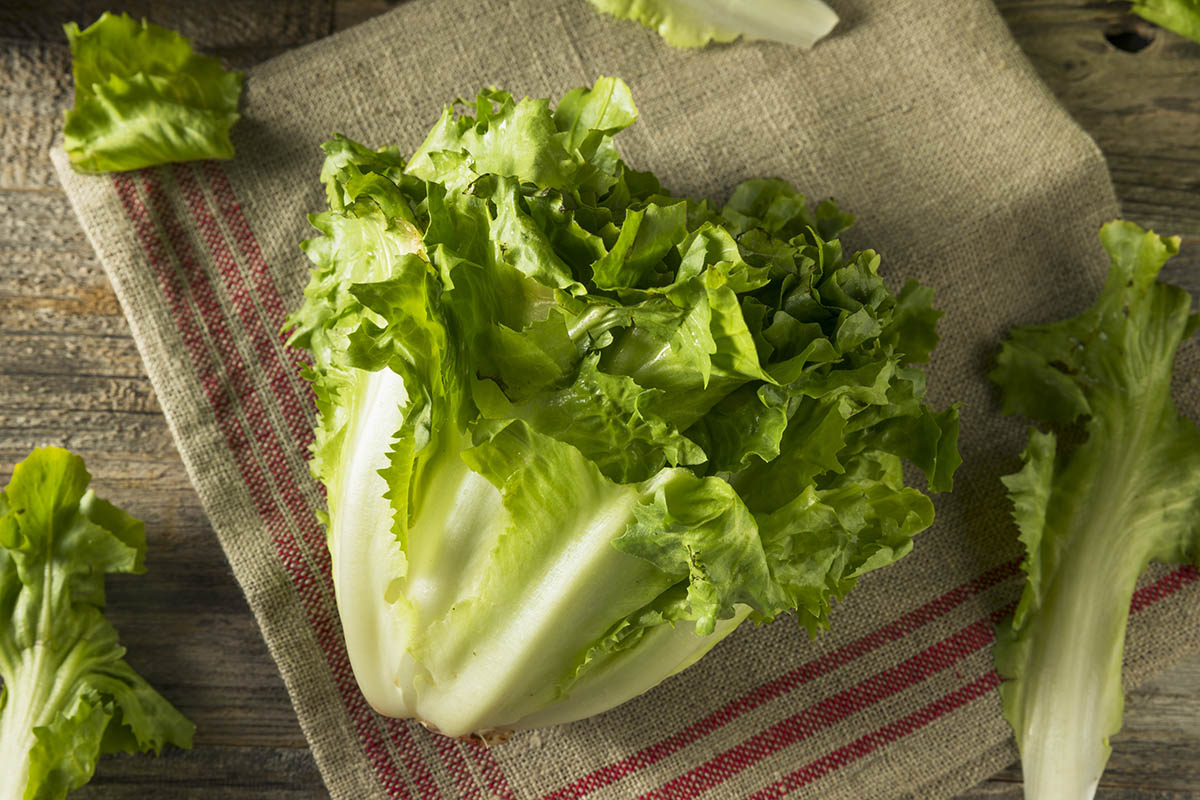 Escarole is a leafy green that’s often used in salads and soups. It’s very similar to kale and endive, but has a slightly bitter tang.

Adding escarole to your salads is a wonderful way to get more scrummy vitamins and minerals in your diet. It can also give your salads a bit more crunch!

Escarole is a versatile green that can be used in many dishes. It can be eaten both raw and cooked. Who doesn’t love an Espresso to kick start their day? The Espresso is a smaller cup of coffee that has a lot of caffeine packed into it.

Originating from Italy, the Espresso has now become a staple for many Americans and Europeans alike.

Espresso can be made from a variety of coffee beans and roasts. This also allows you to customize the flavor of your Espresso to your liking. 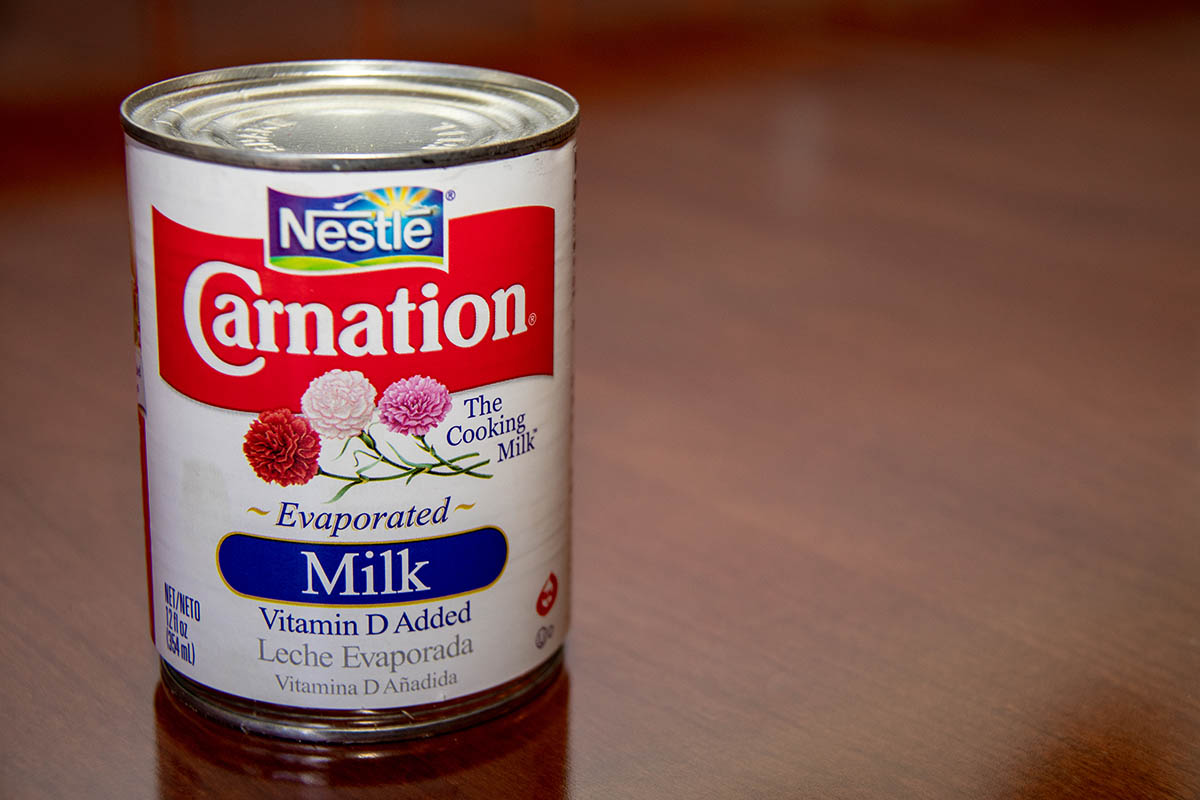 Evaporated milk can be found in cans at your local grocery store. This is an essential ingredient in sweet treats such as fudge, pies, and cakes.

It differs from sweetened condensed milk, which has sugar added to it for a sweeter flavor profile.

And so our list of foods beginning with E comes to an end! We’re sure you remembered more of them than you thought you would.

We hope there are even some interesting foods beginning with E included on our list which you haven’t heard of before, too!

Hopefully you’ve found our list useful and that you’ll be able to impress all of your friends with your newfound foodie knowledge.