Whether you’re trying to answer a quiz question or you’re looking for some ideas for a themed party, we have the answers! 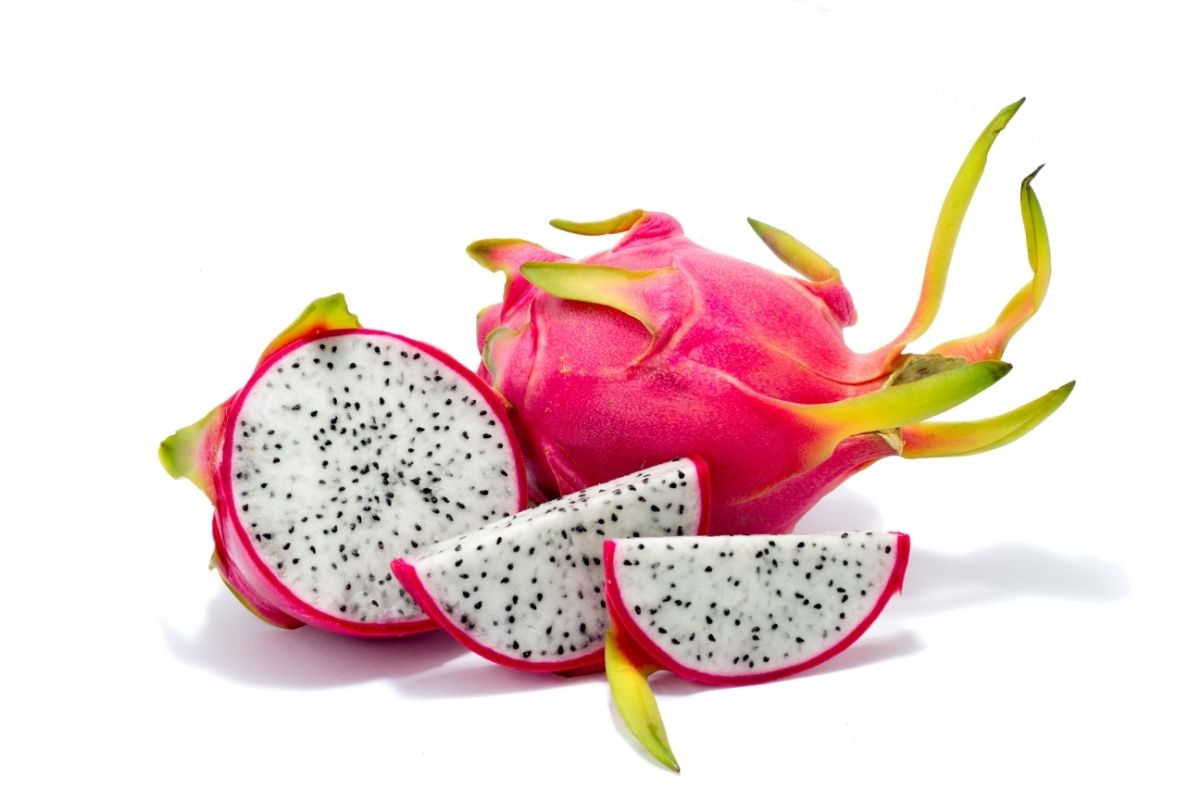 Here you’ll find our globe spanning list of foods that begin with the letter D. From dates to ducks, we’ve got you covered! 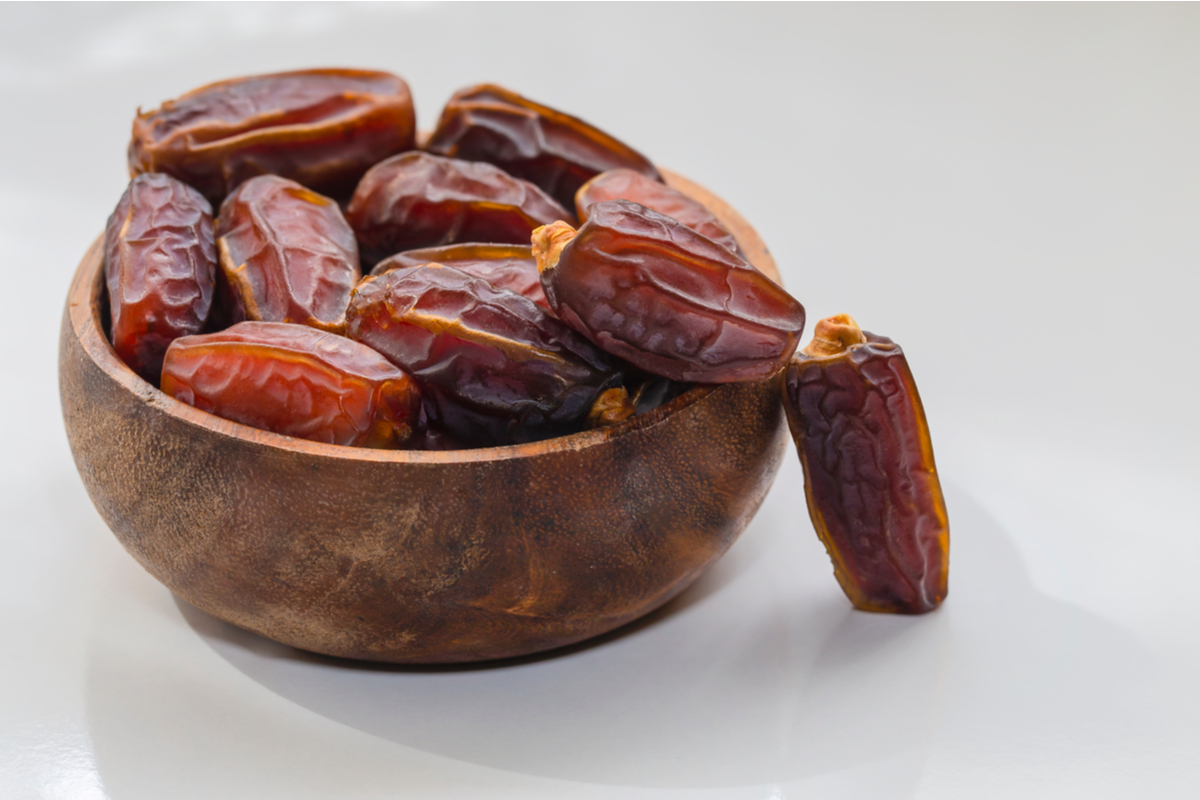 Let’s start with some fruit first!

The date is the fruit of the date palm tree. It is either eaten fresh or dried. They are sold pitted or unpitted. Often, dates are stuffed with other foods like cheese, ham, or almonds.

Dates have been a staple food of the Middle East for millennia. In fact, there is evidence of dates being eaten as far back as 6000 BCE!

Dragon fruits come from Central and South America. Their proper name is pitaya which refers to the tall cactus plants on which these fruits grow.

In English-speaking countries, the fruit became known as the dragon fruit because its thick leathery skin looked like dragon scales. Dewberries are part of the blackberry family. They tend to grow wild and are a trailing plant. Cultivated blackberries tend to grow in a more upright fashion.

The town of Cameron, North Carolina has been known as the ‘Dewberry capital of the world’ thanks to its extensive cultivation of the plant. The damson fruit is a relative of the plum family that is found in England. It has been cultivated there since at least the 1100s. This ominous sounding fruit grows on the Decaisnea tree. The fruit is called dead man’s fingers because they are long, and sort of finger shaped. They are also blue which makes them look like rotten fingers.

Despite the gruesome name, these fruits are sweet and totally edible.

This common flower is often considered a weed by homeowners and groundskeepers. However, this flower is incredibly versatile.

All of the plant is edible. Dandelion leaves and petals are often included in spring salads. The leaves can also be used instead of spinach. 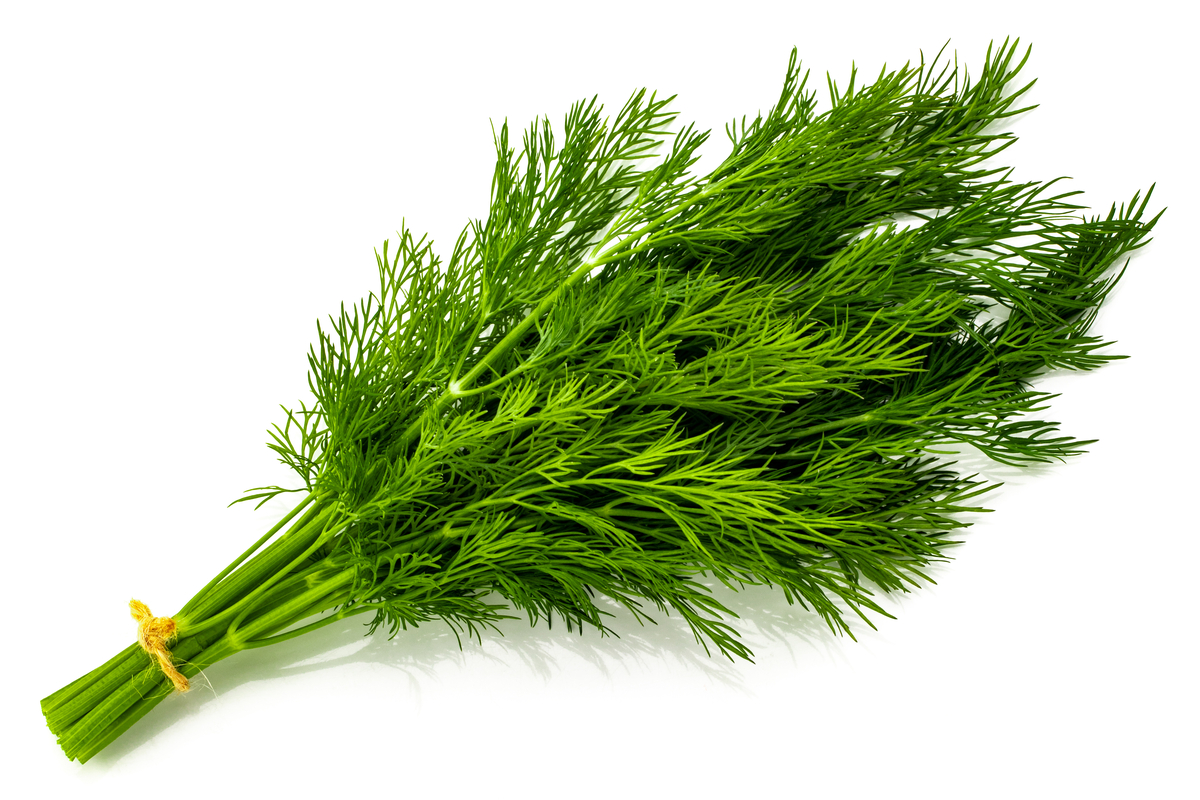 A common herb that grows over much of Eurasia, dill is used as a seasoning in many dishes.

The oldest evidence of dill was found in Pharaoh Amenhotep II’s tomb. Archeologists dated the sample back to about 1400 BCE. 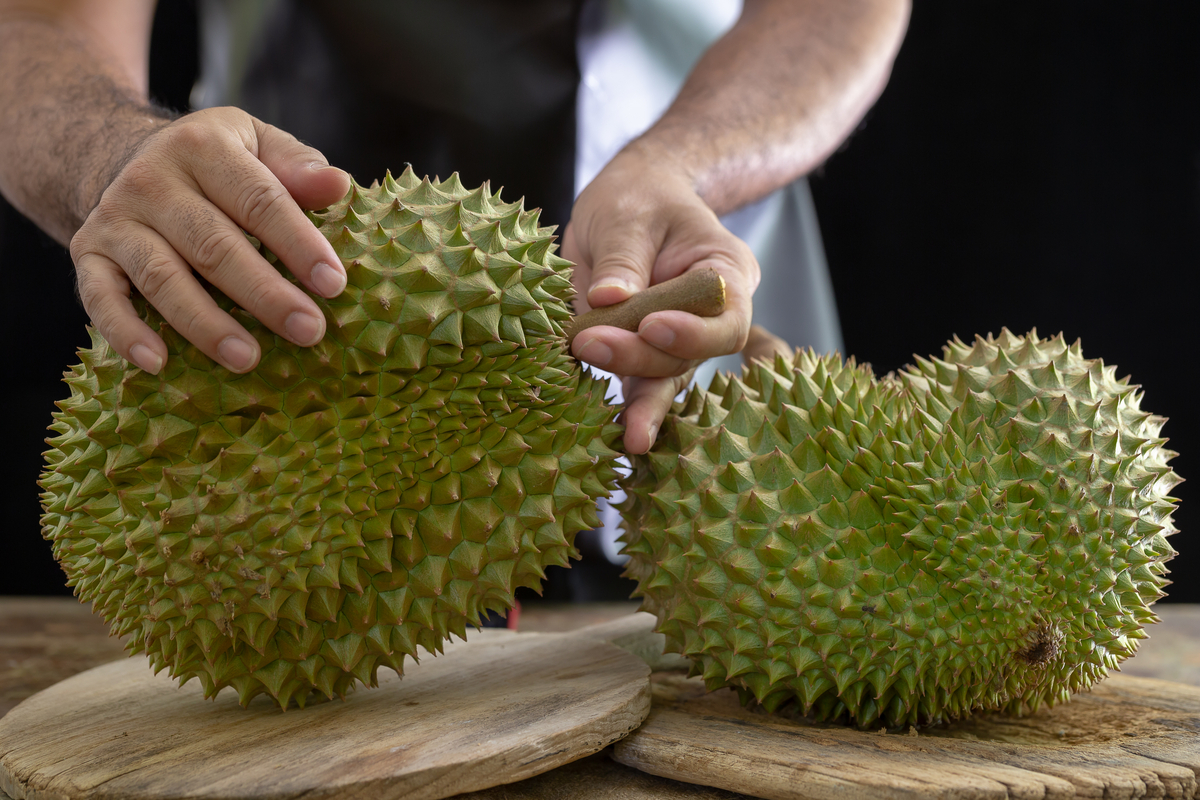 Also known as ‘the king of fruits,’ durians have a thick, spiky hide, a super strong smell and enormous size.

The smell of the durian is quite divisive. Some find it to be sweet and aromatic, while others consider it overpowering and unpleasant. Dolma is a dish common to the Mediterranean and Middle East. It consists of stuffed grape or fig leaves.

They can be served hot or cold depending on the fillings. Typical fillings include rice, cream cheese, and meat. Dahl is an Indian term that is used to refer to lentils or pulses that don’t need to be soaked before use. It is also the name of several dishes made from those lentils.

Commonly, dahl is prepared as a soup with tomatoes, onions, and lots of different spices. This is a South African dried sausage. The name literally means dry sausage, they don’t mince words in South Africa!

Unlike other dried sausages, the Droewors is dried quickly in warm conditions. Other sausages tend to be dried in cooler, humid rooms. This is a type of short pasta. Its name means ‘small thimbles’ because the pasta is about thimble shaped. It is also referred to as short macaroni because it is tubular pasta.

Ditalini is used a lot throughout Sicily and is frequently found in soups and pasta salads. Dosa are thin pancakes made from ground lentils or rice. They originate from South India but are popular across the whole Indian subcontinent. Doner kebab meat is cooked on a rotisserie. The meat is usually stacked in an inverted cone shape and shaved off in thin ribbons.

Doner kebabs originated in Turkey, but they have spread across much of the world. In most of Europe, doner kebabs are viewed as fast food, often enjoyed after a night of drinking. A drumstick is not always a thin wooden stick for playing the drums. In the food world, drumsticks refer to bird legs.

The drumstick is a cut of meat that includes the thigh of the bird. It is one of the meatiest parts of the bird. 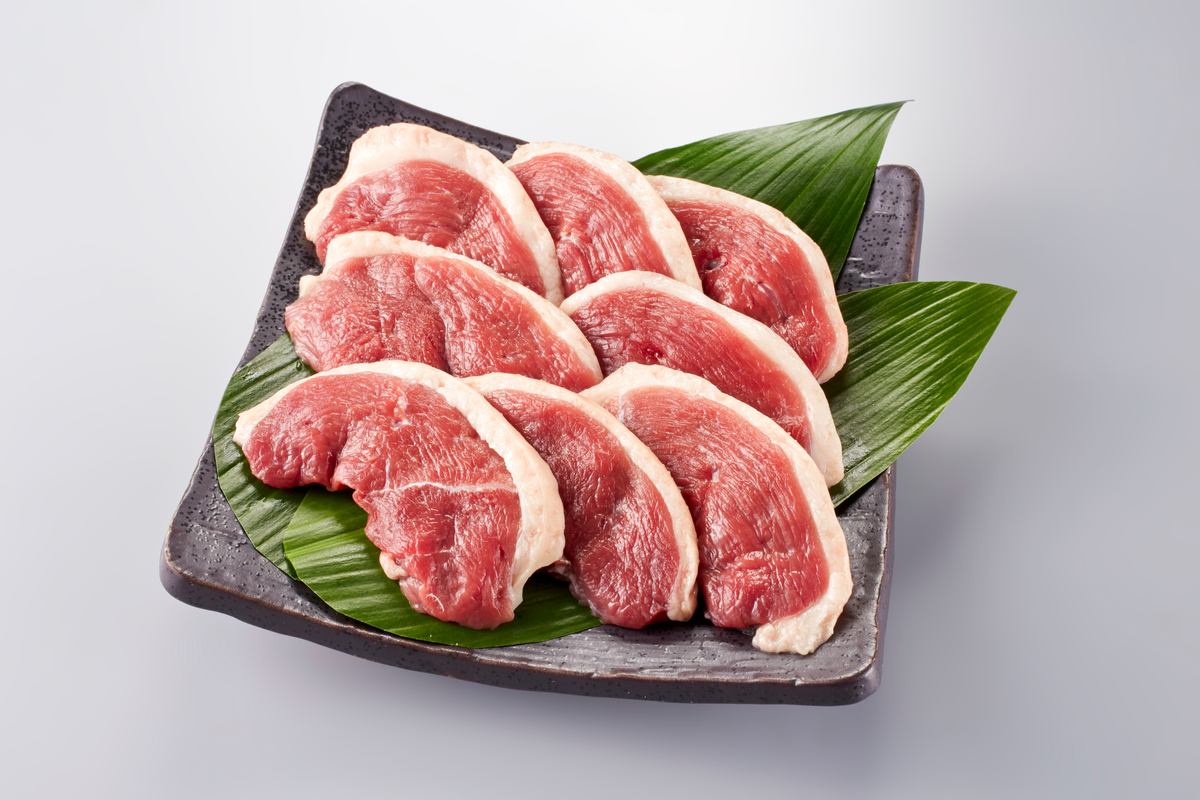 Duck meat is particularly popular in Chinese cuisine. In fact, in China, duck is more common than chicken.

In the West, duck is usually reserved for fancier restaurants and haute cuisine. Probably because ducks are more expensive to keep. Dumplings are food that can be found in cuisines across the globe.

Usually, dumplings are dough wrapped around a filling. The dough can be made from any local ingredients and cooked in lots of different ways. This is a French dish more properly called gratin dauphinoise. To make this dish, potatoes are thinly sliced and layered up. They are then covered in milk or cream and baked. Some recipes also call for cheese to be added. A popular dish in Europe and North America, deviled eggs are hard boiled eggs that have been peeled and halved.

The yokes are scooped out and mixed into a paste with other ingredients like mayo and paprika. Once mixed, the yoke is spooned back into the egg. This is a spicy noodle soup that originated in Sichuan Province, China.
The name, dandan translates as noodles on a pole because street vendors would carry baskets of noodles on poles.

This is a dessert from the Bahamas. It consists of fruits like guava folded into a dough. This is then boiled and served with a sauce. These are two round, fried pieces of dough topped with curried chickpeas and chutneys. They are usually eaten for breakfast or brunch and are a popular hangover food in Trinidad and Tobago. This is a type of winged kelp native to the far northern coasts of the Atlantic Ocean. It is eaten in Greenland, Iceland, Scotland, and Ireland. Draw soup is a category of Southeastern Nigerian soups. It is usually made from okra or jute leaves. A sweet, laminated pastry, the Danish is often filled with fruits or fruit purée. As the name suggests, this pastry was created in Denmark. It was brought to America by Danish immigrants. These are typical fairground and street food found across Canada. In essence, doughboys are deep fried dough topped with fruit, chocolate, sugar, or other sweets.

They are sometimes called fry breads or beaver tails. An American staple, donuts were invented by the early Dutch settlers in New Amsterdam, later known as New York.

Donuts are made from deep fried batter. They are usually ring shaped, but they may also have a filled center. Dover sole is a European flatfish that can be found across the Atlantic and Mediterranean seas.

While the fish is pretty ugly to look at, the Dover sole is actually highly prized by chefs. It has a mild, buttery taste that works well with a lot of ingredients.

The Pacific Dover Sole is another flatfish that can be found off the coast of California. It got its name thanks to its resemblance to the European Dover Sole.