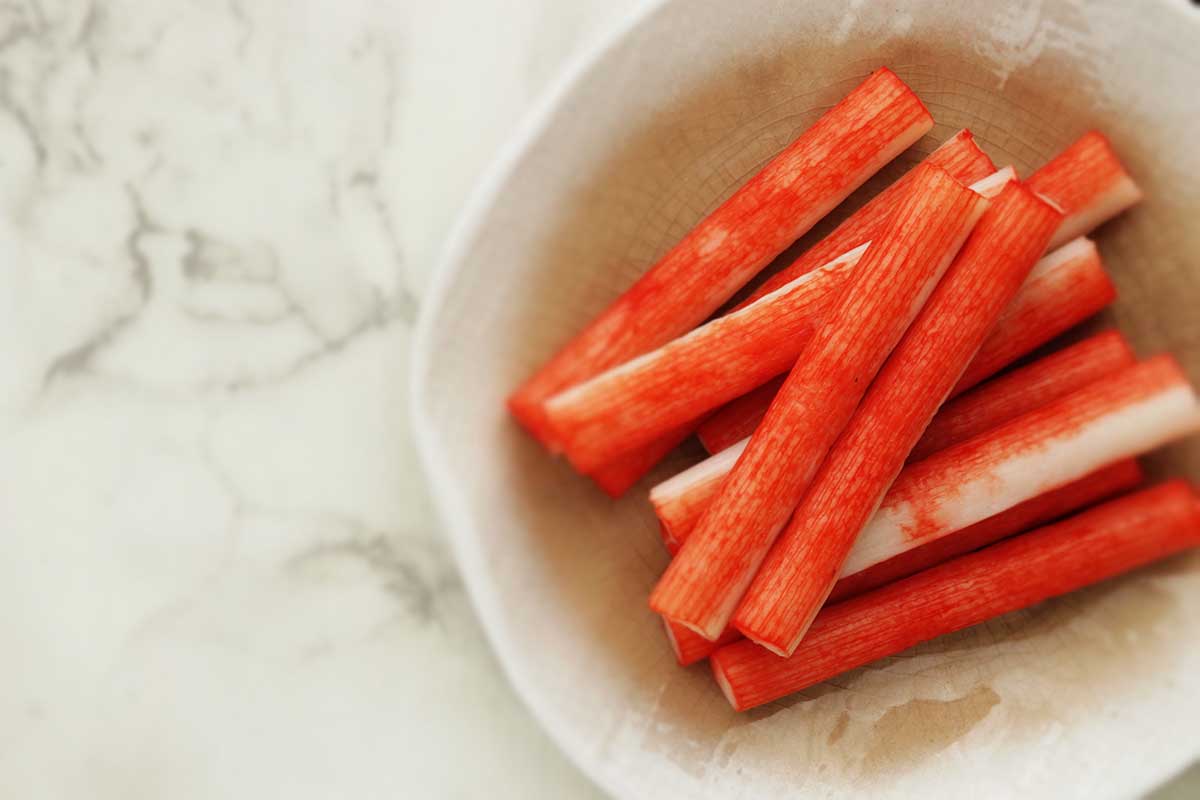 Kanikama, otherwise known as imitation crab, is a delicacy designed to mimic the taste of real crab.

Kanikama is a popular ingredient in Japan, but it is commonly found in Western culture in foods such as California sushi rolls, crab cakes, and crab salad, too.

In this article, I cover some key information about kanikama, from the nutritional value to the different types of imitation crab meat.

So, let’s get started.

What is Kanikama (Imitation Crab)?

In short, kanikama is imitation crab meat made from surimi, the flesh of fish that has been minced into a paste. The fish is deboned, washed to remove unwanted fat, and is then minced.

The flesh of mild fish such as pollock is used to make surimi and is blended with a variety of ingredients, including crab extract to flavor the paste. Following this, the surimi is pressed into a variety of different shapes, including sticks, and colored so that it mimics real crab meat.

First invented in the mid-1970s in Japan, imitation crab has grown in popularity exponentially over the years, particularly in the United States.

Generally speaking, kanikama doesn’t contain any real crab aside from the small amount of crab extract that is used to flavor it.

What Ingredients are in Kanikama?

Generally speaking, fresh crab is best. Kanikama or imitation crab is nutritionally inferior to real crab meat. So, what ingredients are in imitation crab?

Aside from these ingredients, imitation crab also contains a variety of additives, colorings, and preservatives to achieve the desired color, flavor, and texture of real crab.

What is the Nutritional Value of Kanikama?

Additionally, kanikama is highly processed and contains a variety of additives and preservatives. To lead a healthy, balanced lifestyle, you should minimize your intake of processed food and try to incorporate more whole foods into your diet.

Bearing this in mind, then, there are many other types of seafood that are more nutritious than imitation crab.

Can You Eat Kanikama Raw?

Kanikama is designed to be quick and convenient, so you can eat it straight out of the packet. That being said, kanikama isn’t actually raw.

Imitation crab is fully cooked during the process of making crab sticks. You can chop them up and add to a variety of cold meals such as salads, sushi, and ceviche directly without having to cook it first! This is one of the reasons that imitation crab is so convenient.

A positive of imitation crab is how easily accessible and cheap it is in comparison to real crab. If you live somewhere away from the coast, then sourcing fresh crab might be a challenge.

Additionally, if you are hosting a large party of guests, you might prefer to use imitation crab in the appetizers and dips as you’ll be preparing it for more people than usual and it is significantly cheaper than real crab.

Imitation crab allows you to create similar recipes and have a similar experience to eating crab, making it a good party substitute if you can’t afford the real thing.

Another positive is that imitation crab is incredibly simple to prepare and use. Since kanikama is pre-cooked, you can use it straight from the packet without the worry of having to cook it thoroughly.

It is also highly versatile, making it an ideal ingredient for a variety of different recipes that call for the addition of seafood.

However, the main negative of imitation crab is that it is a highly processed substitute to real crab. In comparison to real crab meat, it is packed full of additives, preservatives, and colorings, and it generally contains fewer nutrients than real crab.

That being said, while it makes a good substitute for real crab meat should you need a cheaper alternative, imitation crab shouldn’t be part of your regular diet or recipes.

Another negative is that some imitation crab products fail to list seafood ingredients accurately, which increases food safety and allergy risks. That being said, inaccurate and inadequate product labels increase your risk of an allergic reaction to an ingredient that isn’t properly disclosed.

If you have any food allergies, it might be the safest idea to avoid unlabeled imitation crab (at parties) as it may contain common allergens including fish, crab extract, and eggs. Alongside this, if you have a gluten intolerance, you should also avoid imitation crab as it often contains wheat starch.

All things considered, although imitation crab is highly versatile, it is better to use it as an occasional ingredient as opposed to a regular addition to your diet.

Types of Imitation Crabs and their Uses

Kanikama comes in a variety of types that are great for different uses. The fact that it is already cooked makes it an incredibly convenient ingredient to use, and you will find imitation crab either in the frozen or refrigerated section at the grocery store.

Crab sticks are arguably the most popular type of imitation crab. Whether you use them in California sushi rolls, have them as a grab and go snack, or use them as an appetizer with cocktail sauce, they’re a convenient ingredient to have in your refrigerator.

Two common types of imitation crab are chunks and flake-style crab. In terms of their uses, you can use these types of crab in crab cakes, dips, spreads, crab salads, pasta dishes, and chowders.

Shredded imitation crab is another common type that you will be familiar with at the grocery store. You can use imitation crab in a variety of different recipes, including leafy salads, fish tacos, crab cakes, lettuce and sandwich wraps, and for pasta salads.

If you’re interested in seafood recipes, yet don’t have access to real crab, then imitation crab is a great alternative to use for special occasions.