If you’re anything like me, there’s nothing you love more on a hot summer’s day than a McDonald's caramel frappé!

With its rich caramel flavor, lashings of whipped cream, a hint of coffee to give you a buzz, and of course all that super refreshing ice it's all blended with- it makes for quite the treat!

And then, to finish it off, there’s also that drizzle of caramel sauce over the whipped cream to really perk you up.

Contents show
1 What Exactly is a Frappé?
2 Is a Frappé A Milkshake?
3 Latte Vs Frappé
4 Frappé Vs Frappuccino
5 McDonald’s Caramel Frappé Recipe
5.1 Recipe by Laura Ritterman
5.2 Nutritional Details Per Serving
5.3 What You Will Need
5.4 Recipe Ingredients
5.5 Method
6 Tips And Tricks
7 Wrap Up 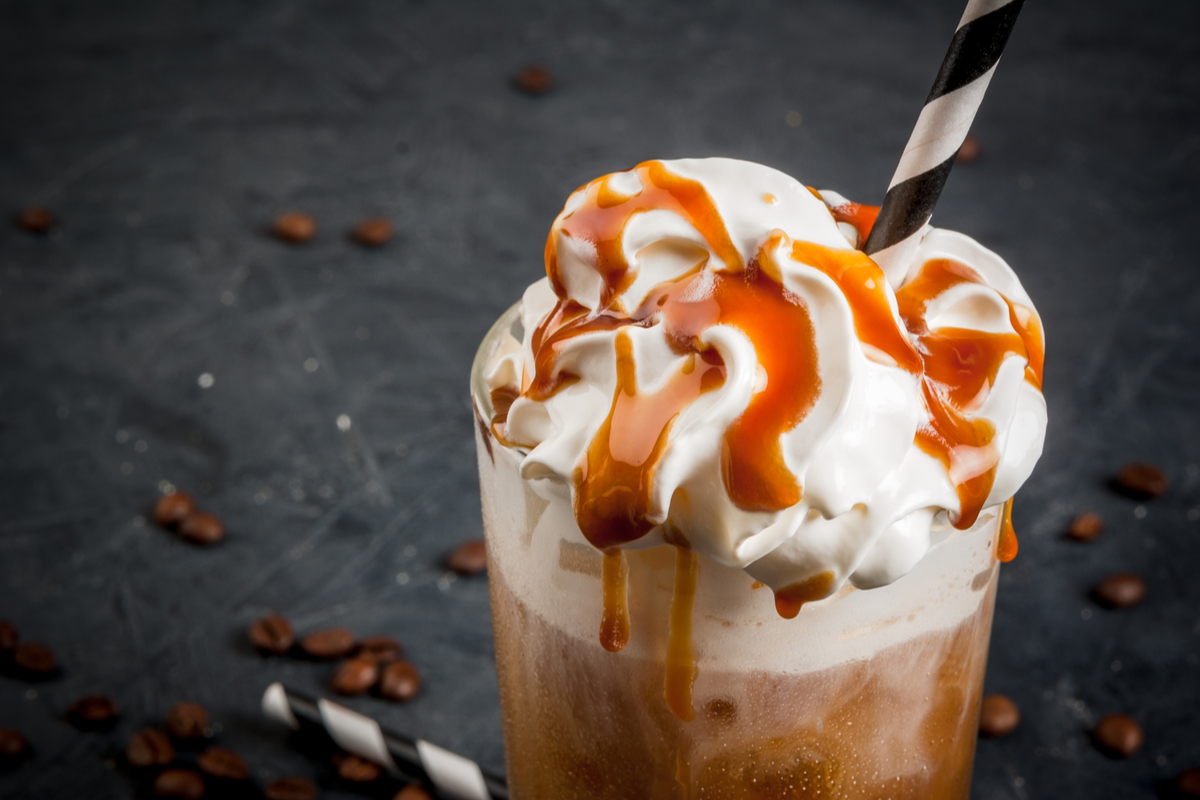 If you haven’t tried it before, you sure are missing out. It tastes like a heavenly caramel ice cream. And despite the buttery caramel and whipped cream, it’s relatively light and the perfect treat to cool you down in the hot sun.

McDonald's isn’t the only fast food place to make drinks like this one - you can get very similar offerings at the likes of Starbucks and Dunkin’ Donuts. But it seems the majority of people feel that McDonald’s makes the best frappés.

But in this article, we’re going to explain how you can make this delicious drink in the comfort of your own home. You might even decide you prefer this version!

We’re also going to provide you with an explanation of what a frappe is and how it differs from similar drinks.

What Exactly is a Frappé?

The frappé is of Greek origin, and was invented by an employee of the representative of the Nestlé company, known as Dimitris Vakondios in 1957.

He wanted to make an instant coffee during his break but couldn’t find any hot water. So instead he improvised by making his coffee with cold water and adding a few ice cubes.

Since then, the term frappé, pronounced frap-pay, has been used to describe any iced drink that contains coffee. Frappés are always served cold, and usually with a whipped cream topping.

The drink can be blended, beaten or shaken, and it can have a smooth texture or a foamy one.

The ice can be added either before or after the coffee, and you can add any other ingredients as you please, such as milk, sugar, vanilla and or any sweet sauces (such as the caramel in this recipe).

Is a Frappé A Milkshake?

Now, McDonalds is also well known for its yummy milkshakes. But there’s an important distinction to make between frappés and milkshakes..

The milkshake beverage is generally composed of milk and ice cream, perhaps with a little added flavoring, and is whipped or blended and is sometimes a little foamy.

It does not necessarily contain any coffee or ice in it. If it did then it would be classed as a frappé rather than a milkshake.

A latte is also a very specific drink. It is half espresso and half milk. It is generally served hot, but you can also get iced lattes too. And the relative proportion of milk and espresso stays the same in a latte even when served cold.

The main difference between an iced latte and a frappé is that you can adjust the amount of milk and coffee in a frappé, and you can also add other ingredients and flavorings such as caramel sauce or chocolate sauce and so on.

Although they can sometimes be very similar, a McDonald's frappé is definitely not a frappuccino. Frappuccino is a trademarked brand of the Starbucks Corporation.

Like a frappé it also has a coffee or crème base, and is designed to be served cold. It, too, can have other ingredients added such as flavored syrups. 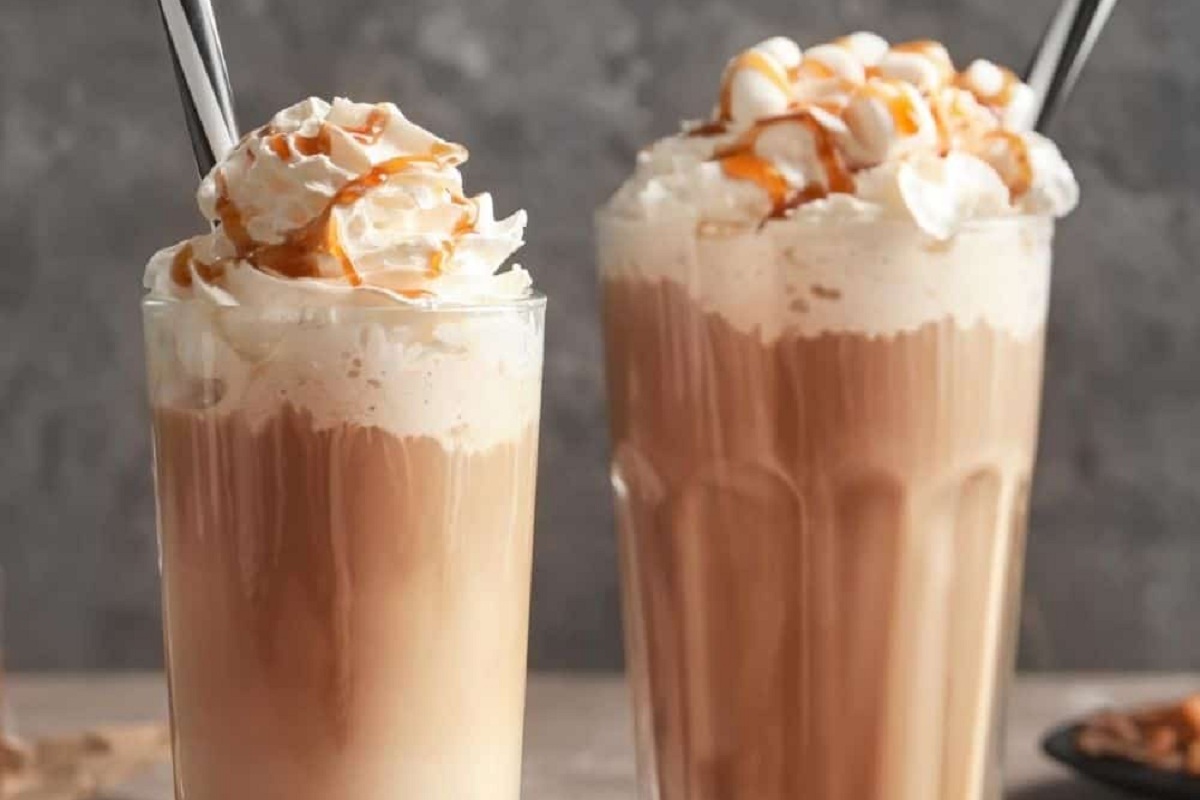 Not only does this McDonalds copycat recipe by Laura Ritterman taste just as good as the McDonalds one (if not better!) but it only takes a measly 5 minutes to whip up at the most, and a single serving comes to less than 60 calories!

The recipe that follows is designed to make a single serving. To make two, simply double the portions of the ingredients.

What You Will Need

In addition to the recipe’s ingredients, you will also need a powerful blender if you want to achieve a nice, smooth texture.

And if you want the ice to be crushed, you must be sure to use a blender that’s up to the task, since many blenders aren’t designed for this.

If you want to whip up a somewhat healthier, lower calorie version of this drink, you can replace the granulated sugar with a suitable low calorie sugar substitute.

Though for best results this should be in a granulated form rather than tablet form.

If you have a coffee machine at home, you can make the drink up with your favorite filter coffee rather than instant.

You can make some really nice variations of this beverage by replacing the caramel sauce with other sauces. Why not go for a hazelnut, vanilla, or Irish cream?

But if you want to stick with caramel flavoring, we can recommend Hershey’s or Richardson’s butterscotch caramel, which will also lend a really nice texture.

And there you have it - a McDonald’s caramel frappé that you can prepare in minutes, enjoy at home, and tweak to your heart’s content!