Tobiko is the Japanese for flying fish roe (eggs). These brightly colored pearls of flavor are an essential garnish ingredient used in countless Japanese meals, the most notable of which are sushi rolls.

Contents show
1 What is Flying Fish Roe?
2 Tropical Flying Fish? What the Heck Are They?
3 Tobiko by Taste
4 Tobiko by Nutrition
5 Chasing the Tobiko Rainbow - Types and Colors of Tobiko
6 Where Can Tobiko Be Purchased?
6.1 Flying Fish Roe 1 LB - Tobiko Caviar Red Sushi Grade
7 Keeping Your Tobiko Fresh
8 Tobiko Sushi - How Is it Made?
8.1 Sushi Making Kit
8.2 Nori Sheets
8.3 Nishiki Premium Sushi Rice
9 Tobiko - FAQ
9.1 Is tobiko eaten raw?
9.2 Is tobiko safe for consumption?
9.3 Is tobiko and masago the same thing?
10 Final Thoughts 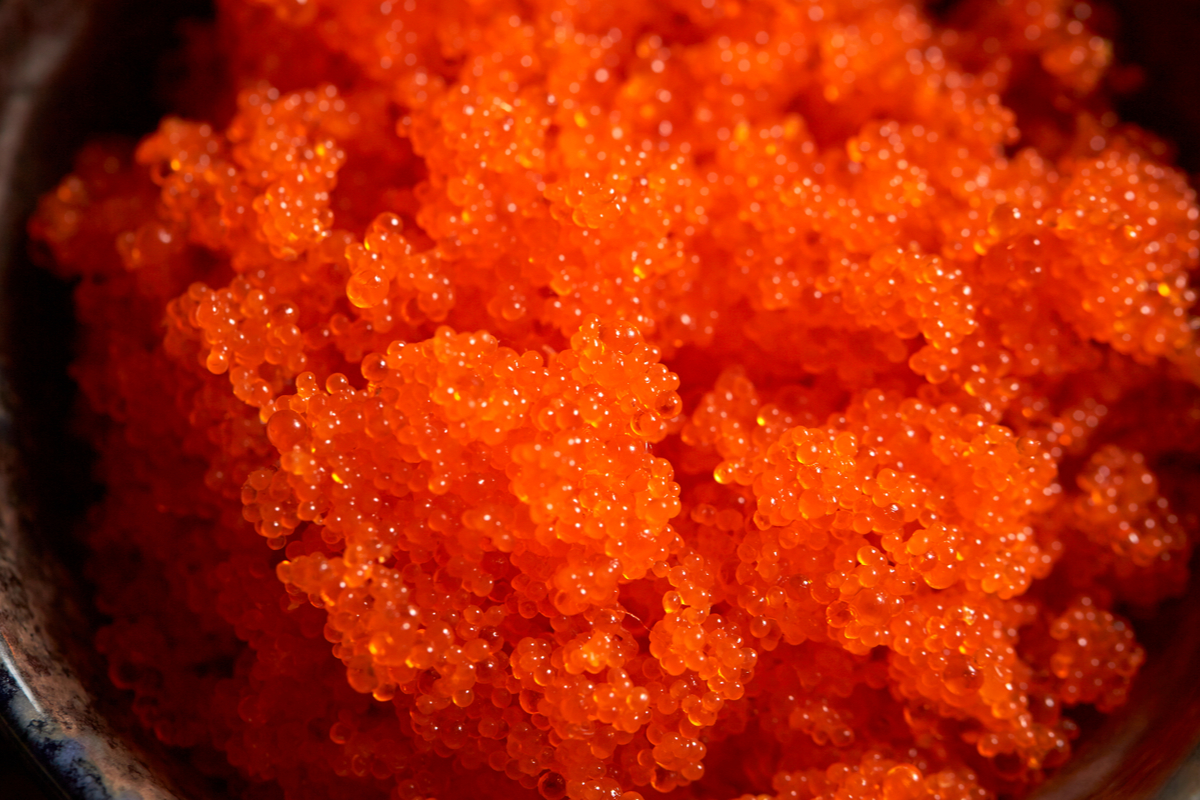 What is Flying Fish Roe?

You wouldn’t be the first to have looked down at your sushi and wondered what that strange fluorescent seasoning is. It’s not some sort of supercharged pepper, and while it does have a salty taste, it’s certainly not salt.

Those tiny, colorful orbs are actually tobiko, which is the Japanese word for the eggs of the flying fish. It’s essentially just caviar but from tropical flying fish rather than sturgeon.

Measuring anywhere between 0.5 and 0.8mm in diameter, the natural hue of tobiko is orangey-red, but one of the magical things about it is that chefs can use other ingredients to dramatically alter its hue.

So, don’t worry if your tobiko is green (wasabi) or even black (squid ink). It hasn’t gone bad; it’s just due to its chameleonic powers.

Compared to other roe, tobiko is middling in size. For context, it’s smaller than ikura (salmon roe), but larger than masago - capelin roe.

Tropical Flying Fish? What the Heck Are They?

There are a few species of fish that like to catch some sweet air from time to time, but tropical flying fish are the only ones that genuinely look like they actually might be able to take to the skies.

They can’t actually fly as their name suggests, but they are capable of using their large fins to glide, often helping them escape pelagic predators.

Tobiko has a similar flavor profile to caviar, the fanciest of fancy snacks. It’s smoky, salty, but as is the case with a lot of Eastern foods, it’s also satisfyingly sweet, much more so than caviar.

It’s this umami flavor characteristic of Japan that helps tobiko stand out amongst other types of roe.

With a soft, yet crunchy texture, it compliments a wide variety of fish- and rice-based dishes, which is why you’ll see it used as the finishing touch on sushi rolls so often.

Much like most other fish, tobiko brings some fantastic health benefits to the dinner table. It’s chock-full of omega-3 fatty acids and practically bursting with proteins, making it a fantastic post-workout treat.

Tobiko also contains lots of selenium which our bodies use to ensure healthy reproduction, regulate thyroid gland function, DNA production, and to protect us from infection and free radicals.

Sounds pretty good, right? Well, before you start buying it by the truck-load, you should know that tobiko is also an exceedingly high cholesterol food.

So, enjoyed as a treat once every so often — perfect. Eaten every day — not so great.

More often than not, tobiko is salt-seasoned before application too, so if you’re trying to watch your sodium intake, steer clear of these enticing pearls. 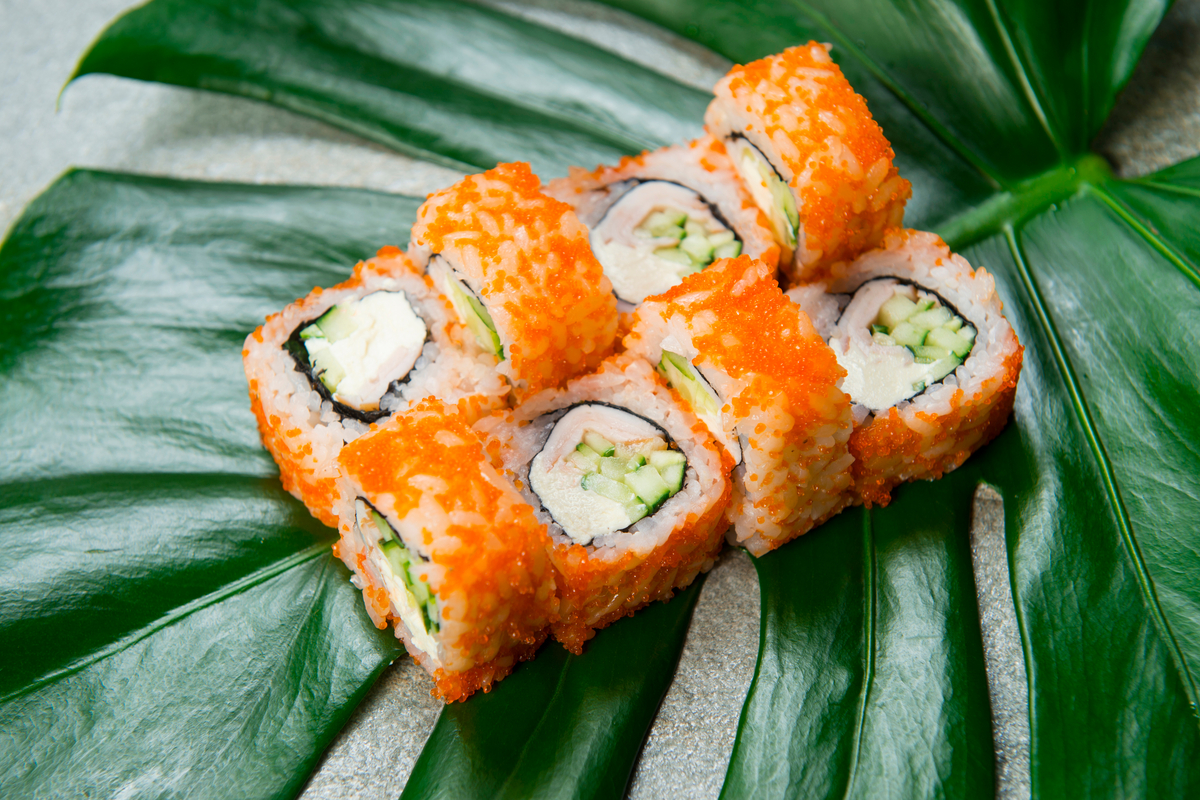 Chasing the Tobiko Rainbow - Types and Colors of Tobiko

As I’ve already touched upon, tobiko has the uncanny ability to mimic the hue of another ingredient. If, for example, you mixed it with some beetroot, it would turn a very deep red and then hold its color indefinitely.

Hypothetically, you can stain tobiko with any foody dye, but the main variations you’re likely to encounter are:

Sometimes, tobiko is dyed not just to match ingredients in the meal, but to contrast the colors of the meal. Differently colored tobiko may also be used together in order to form enticing decorative patterns.

Where Can Tobiko Be Purchased?

If I had you at “What Is Tobiko…” and you just want to go ahead and buy some already, you should be able to find some to order in your local Japanese eatery. If you want to have some in your fridge, so you can try your hand at using it in your own meals, try any nearby Japanese or Asian grocery stores.

Granted, Japanese grocery stores aren’t exactly a staple of most highstreets, but don’t worry if you can’t travel 200 miles to the nearest one. You can also buy some from trusty old amazon.

Being that if you value your health, tobiko is more of a once-every-so-often sort of treat, you’ll need to know how to store it, so it doesn’t go bad before you get a chance to finish it. After all, it’s not exactly cheap.

The best way to keep those flying fish eggs fresher than fresh is to store them in an airtight container in your freezer. You’ll get roughly 3 months' life out of them keeping them in this cryogenic state, which is more than long enough to consume them responsibly, especially if you’re sharing them with dinner guests.

That said, don’t eat them when frozen. That’s just a good way to get some chipped teeth. To defrost them, simply spoon your portion into a bowl, and leave it to rest in your refrigerator for a few hours. Feel free to do this overnight to ensure they’re ready in time for your lunch.

I’d recommend covering your bowl used to defrost them as exposure to air can lead to a loss of freshness.

Tobiko Sushi - How Is it Made?

Now let’s get down to delicious business! Here’s what you’re going to need to make your very first tobiko sushi delights:

Eager to get cracking with your sushi experiment? Just follow this step-by-step guide.

Before we part ways for you to start your tobiko adventure, I thought it would be nice to wrap things up with a brief FAQ section just to be sure you have all the info you need.

It may be flavored and colored, but yes, tobiko is indeed eaten raw.

Is tobiko safe for consumption?

A fully pasteurized snack, tobiko is absolutely safe for human consumption, but it’s a good idea not to eat too much due to its high cholesterol level.

Is tobiko and masago the same thing?

Tobiko is the roe (fish eggs) of the tropical flying fish, whereas masago is the roe of the capelin. Generally much brighter, larger, and more flavorful than masago, tobiko tends to cost quite a bit more.

There you have it; tobiko is the eggs of the tropical flying fish, and any sushi recipe that involves its use can be considered tobiko sushi.

I hope you learned everything you need to know about tobiko. Now you can enjoy this versatile snack knowing exactly what you’re eating. Bon appétit, or as they say in Japan, “meshiagare”.