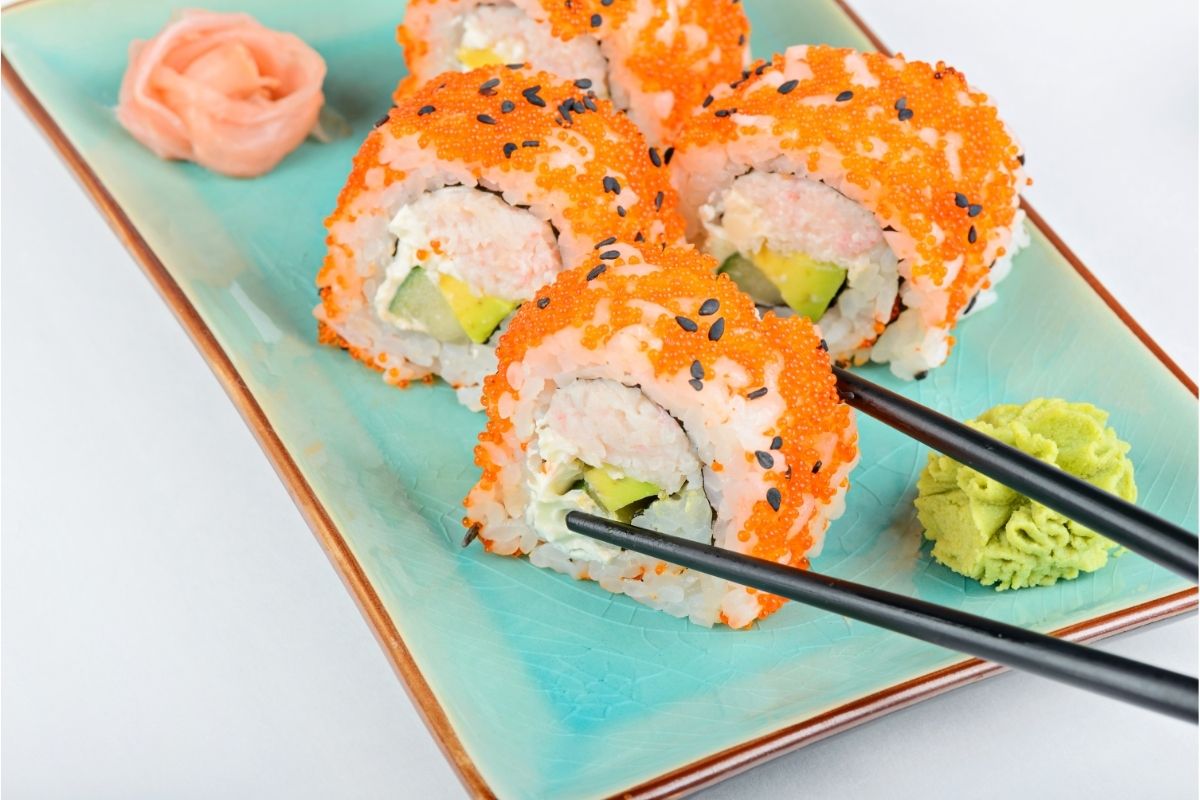 You probably have seen or heard of Masago or Masago sushi before. I mean, any sushi fan is bound to have come across it at least once, but may be put off when they find out what it is…. Is that a clue? But what is Masago sushi?

In this article, we are going to be clarifying exactly what is meant by Masago. Masago sushi is, and how to make it. We will also be exploring what it might taste like, if it is safe, whether it needs to be cooked, and if it is healthy.

So if you are curious as to what Masago sushi is, or want to find out more about Masago in general, then this is the perfect article for you!

Masago is the name given to the roe of the capelin fish.

Roe is basically the eggs of fish, more specifically it is the totally ripe internal egg masses from the ovaries of the female fish. Alternatively, it may be the excreted, external egg masses of fish.

The capelin fish is a type of smelt, and their roe is often used in Japanese cuisine. The small eggs known as Masago are tiny, spherical shapes that are naturally dull yellow.

It is important to point out here that when Masago is served, it often appears a vibrant orange color. However, it is likely that this has been dyed to make it look more appetizing.

The reason for this is because there is a similar type of roe called Tobiko that comes from the tropical Flying Fish. Their roe is bright orange and thus looks more appetizing. Masago is made to look like this.

Both Masago and Tobiko can be used as sushi toppings or eaten alone with other foods. As an edible delicacy, they are eaten in very small amounts. As stated, it is used in Japanese cuisine but has been found to feature in other Asian cuisines, too.

That being said, it is also found in the cold waters of the North Atlantic sea, the North Pacific sea, and the Arctic sea. This is because the fish Masago comes from (the capelin) prefers colder waters.

With this in mind, it is clear that it is not just available in Asia, but it is available in many different countries.

What is Masago Sushi?

Masago sushi is simply sushi rolls that have been made up and then rolled into Masago roe. The Masago then clings to the sushi roll and coats it in small orange spheres.

As you may know from the previous section, the orange Masago roe is often dyed to look this way. The reason for this is because it is naturally a pale yellow color which does not look as appetizing.

It may even be added to sashimi sushi, making up the top layer of the sashimi. Some sushi restaurants may incorporate it into their dishes in other ways too, such as serving it on crackers or on the side of their meals.

For example, it may be used in egg omelets, on salads, and even eaten alone! Many restaurants may also use Masago on sushi in place of the slightly pricier Tobiko roe.

Tobiko is of a higher quality and does not need to be dyed to achieve the vibrant orange color. The downside is that Masago is smaller in size when compared to Tobiko.

Masago is a popular sushi topping and ingredient, and can be found in sushi restaurants all over the world, but particularly in Japan.

The taste of Masago is similar to that of most types of seafood, it is salty with a very distinct ocean flavor.

We hope this makes sense, but if not, we simply mean that it tastes as though it came from the sea, as it is so salty and fishy. The texture of it, believe it or not, is quite crunchy, and can be reminiscent of sand.

This is often surprising to those who haven’t tried it, but we think it fits in well with the overall theme as it is a type of seafood and sand is in the sea. The reason for this sand-like texture is because of how fine it is. It is reminiscent of grains of sand.

The saltiness, sandy texture may be better described as being ‘brine-y’. It is distinctively fishy and has a slightly bitter aftertaste. That being said, it is more subtle and mild in its fish flavor than some other types of roe and indeed, sushi.

See Also: What To Serve With Fried Fish

No, Masago roe is not typically cooked. It is eaten raw and is usually served on sushi or alone as a topping for crackers, salads, and even as a spoonful on the side of a meal.

Raw fish eggs are something of a delicacy in different parts of the world, and they are not usually cooked.

Masago is, however, typically dyed first before it is served. This means that it may have undergone at least some type of treatment by humans. It may also be flavored with salt and other seasonings.

The reason we are clarifying this is to ensure you know that it is unlikely that you will be eating Masago ‘straight from the sea’, so to speak.

Bear in mind that, because it is raw, there may be restrictions regarding the consumption of it by certain groups of people. Read the next section of this article to find out more.

Is Masago Safe to Eat?

Generally, Masago is safe to eat. However, we should make it very clear that Masago is a type of raw fish.

More specifically, they are raw fish eggs, also known as roe. As such, they may not be suitable for consumption by everyone.

As a general rule, any type of raw meat, fish, eggs, and seafood poses a risk of illnesses such as food poisoning and other food-borne conditions. Masago is no different.

For the vast majority of people who have no prior health issues or conditions, consuming small amounts of Masgo every so often is fine.

However, if you have a reduced immune system, a seafood allergy, or if you are pregnant, you should not consume Masago (or any other raw foods for that matter).

Seek advice from your family doctor to be sure, and if you are pregnant or nursing you can ask your midwife of Ob-Gyn for advice.

No. Masago is not caviar. However, both Masago and Caviar are very similar. They are both different types of roe (also known as fish eggs).

To be more specific, the only True caviar in existence is the roe that comes from the fish known as the sturgeon fish.

Masago, on the other hand, is the roe that comes from the capelin fish (a type of smelt).

That being said, the confusion is likely to come from the fact that the term caviar is often incorrectly used as a blanket term for all types of fish roe.

However, it is important to note that they are not the same, and Masago is not caviar.

Yes, smelt roe can be healthy. In small amounts, some benefits can be gained from smelt roe.

For example, smelt roe is packed with nutrients such as Omega 3, vitamin B12, and selenium. It is also a source of protein.

However, as it is raw fish, it is not recommended to be eaten in large amounts. As well as this, it may be high in sodium and so should be eaten occasionally rather than regularly.