The Jamaican cuisine has on offer some of the most delicious tasting dishes and drinks in the world. They are packed full of heat, flavor, and delicious herbs and spices. Jamaican cuisine is known for its use of ginger, hot sauce, coconuts, and lots and lots of rum (well, at least in their drinks).

The best thing about Jamaican cuisine is that there is something to suit everyone. This means that no matter what your preferences are, or the people you are cooking for like, you will be able to find at least one Jamaican dish that will be a hit - and it shouldn’t be too difficult either when you consider how downright delicious they are.

A common misconception about foods from new cuisine is that they will be difficult to make. However, we are here to tell you that this couldn’t be further from the case. We have found 20 incredibly tasty Jamaican recipes, all of which can be made fairly easily, even if you have no prior experience of cooking Jamaican cuisine.

So, if you are dying to try your hand at some Jamaican Jerk dishes, or want to make up some Jamaican drinks for cocktail night, this could just be the ideal article for you. 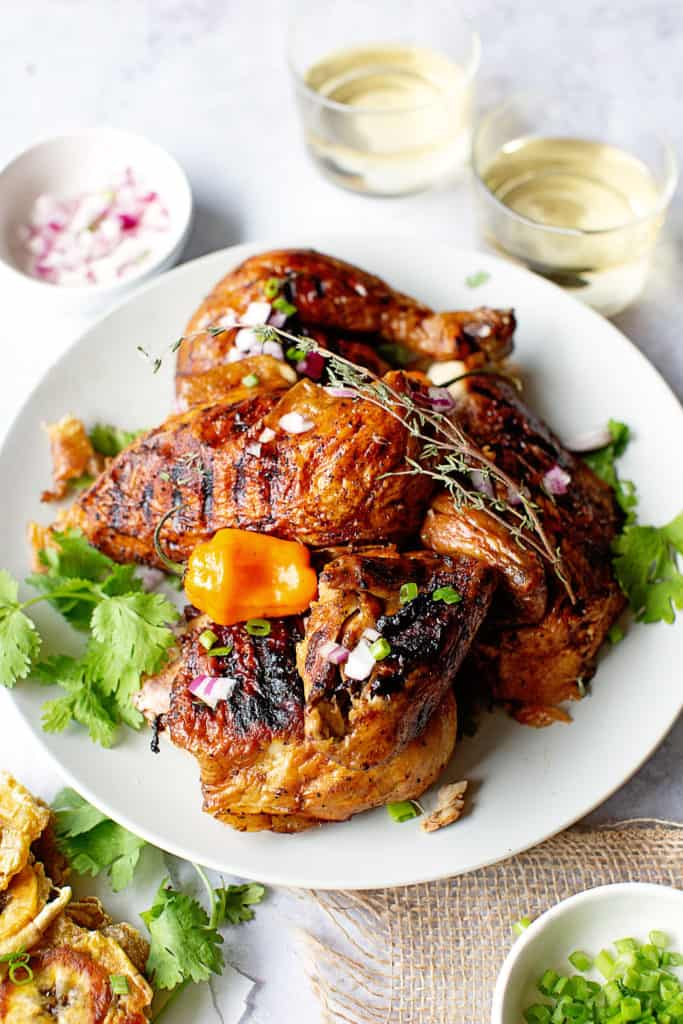 What could be more authentically Jamaican than jerk spices on chicken? Jamaican Jerk Chicken is easy to make, packed full of delicious flavors, and deliciously more-ish. It is a great way of introducing fussy eaters into the world of Jamaican cuisine, since chicken tends to be universally enjoyed, and the flavorings and heat can be adjusted to your liking. 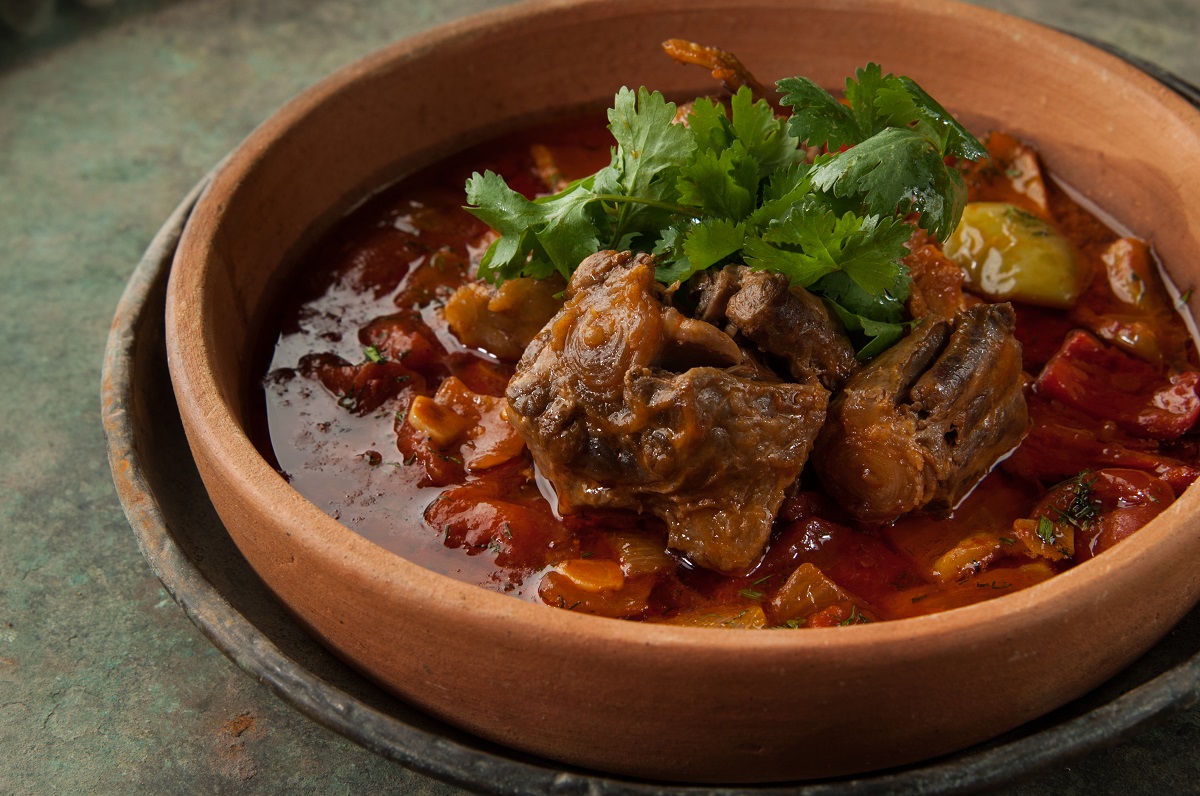 Oxtail soup (or stew as it is technically) is a traditional meal in the Caribbean. It is made with a caramelized, browned sauce to give a slightly sweet flavor, and it is packed full of herbs and spices to give it its recognizable flavor. Slow cook it for the best flavor and texture. 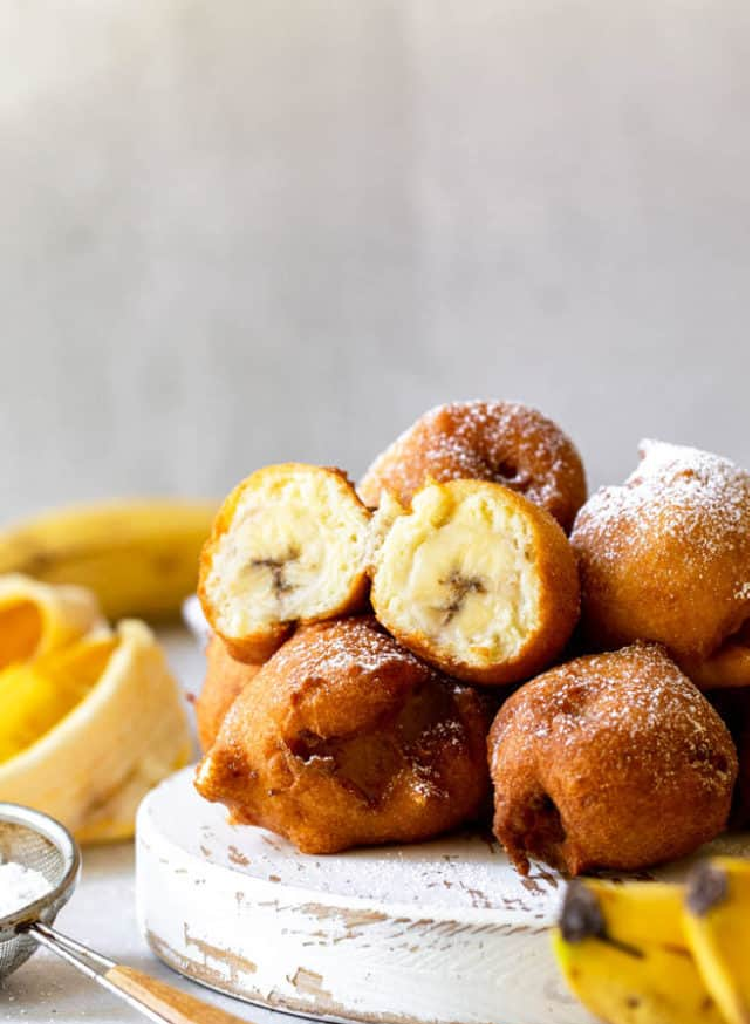 Bananas. Batter. Fried in oil. It shouldn’t work but it really does. Banana fritters are a very popular sweet treat in Jamaica. They are best served when hot, and they are usually doused with vanilla and sugar too for that extra sweet kick! Shrimp, well, any seafood really, is widely available in Jamaica. The addition of jerk seasoning makes it authentically Jamaican. The shrimp in this recipe actually get cooked on a skewer, but if you wanted to fry them to be crispy before putting them in a taco then that could work too. 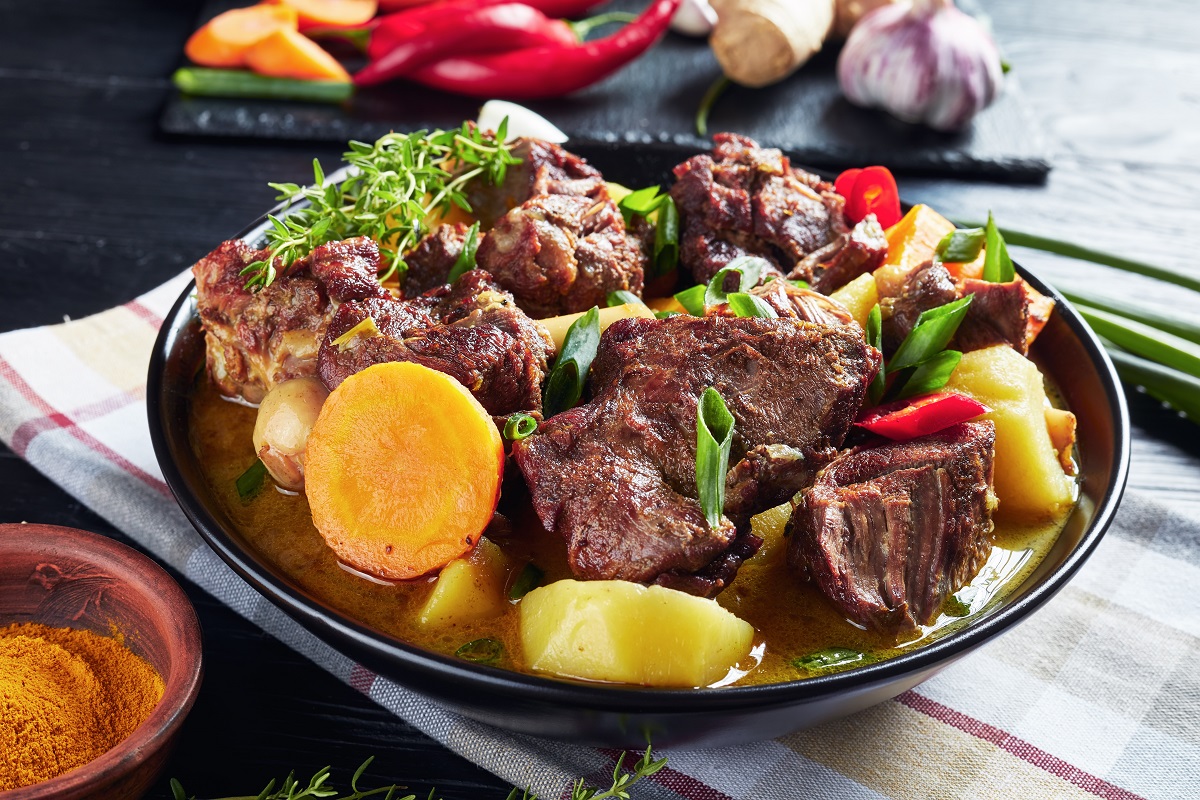 …or curried goat if you want to get specific. The goat might not be a common type of meat eaten in the US, but in Jamaican cuisine, it just so happens to feature in one of the island's most popular recipes. Spicy and meaty, resembling lamb or beef in terms of flavor and texture! 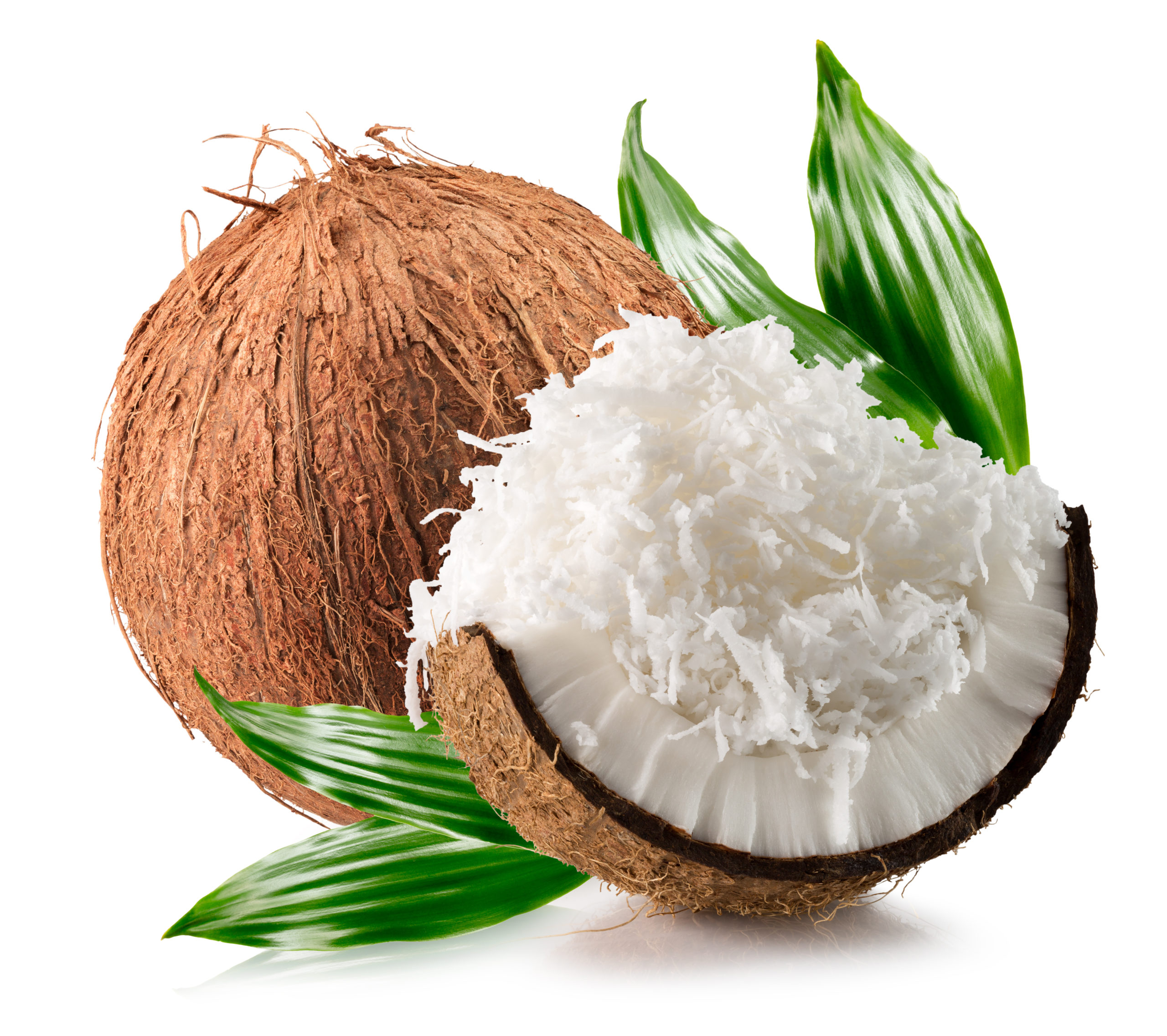 We weren’t kidding when we said Jamaican cuisine was heavy on the coconut, and this dessert certainly gets it right. It is less of a cake and more of a sugar-filled candy. Believe it or not, there is not so much as an egg or ounce of flour in this ‘cake’. Even so, it is a delicious treat loved by all ages. 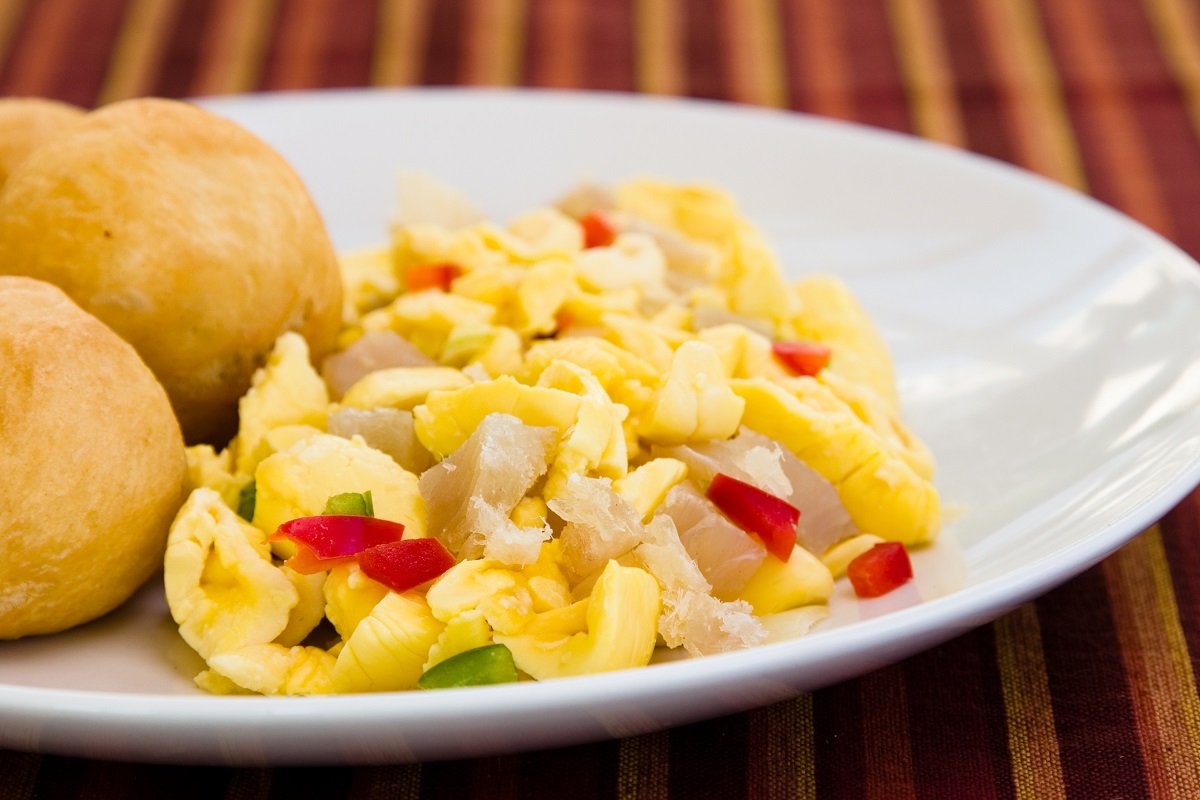 An important meal in Jamaican cuisine, and it is usually eaten at breakfast time. Ackee, if you didn’t know, is actually the national fruit of Jamaica. It may seem crazy to pair a fruit with a salted fish (salt fish is literally salted cod) but it works so well! This is mainly because the food is not sweet as you would expect a fruit to be. It actually has quite a kick, thanks to the scotch bonnet peppers and spices that feature. Not to be missed if you want an authentic Jamaican breakfast dish. 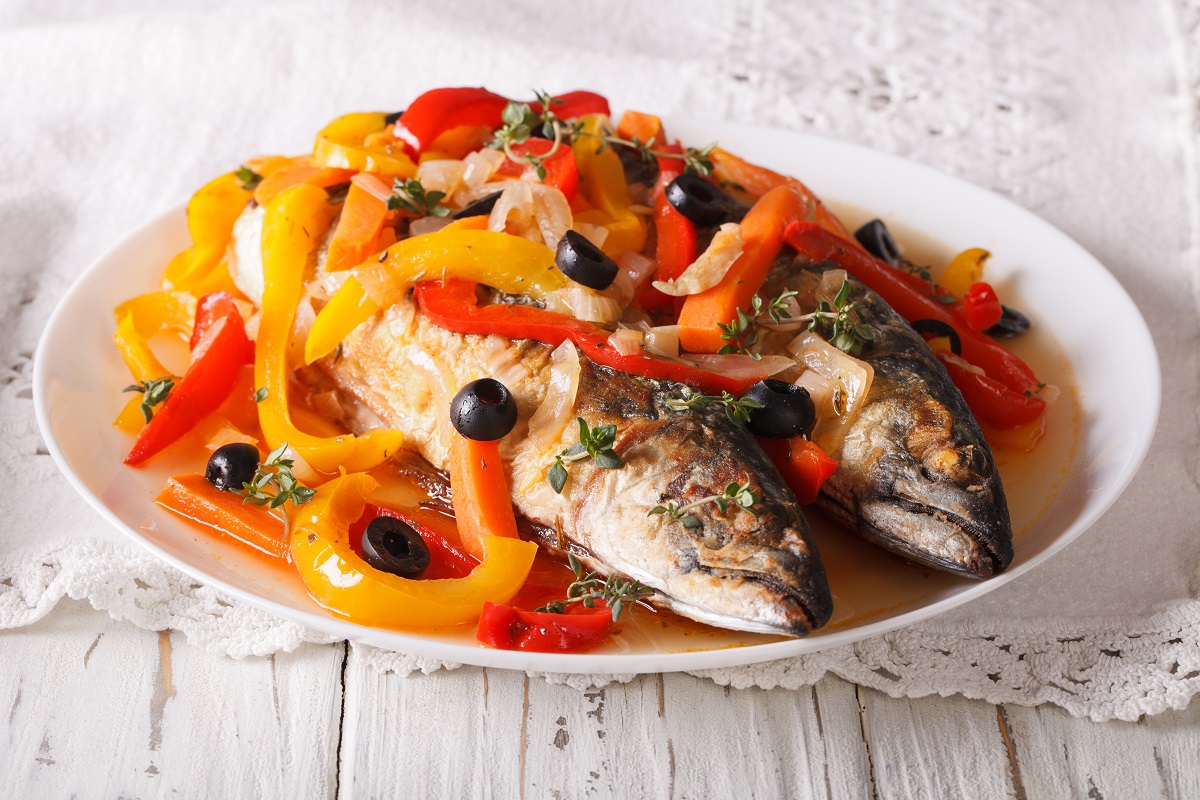 This is the marination of fish in a mixture of vinegar, herbs, spices, and vegetables. Scotch bonnet peppers are often used in the Jamaican version of this dish. The fish that is most often used in Jamaican cuisine is the red snapper, so be sure to get some of this to make it truly authentic. 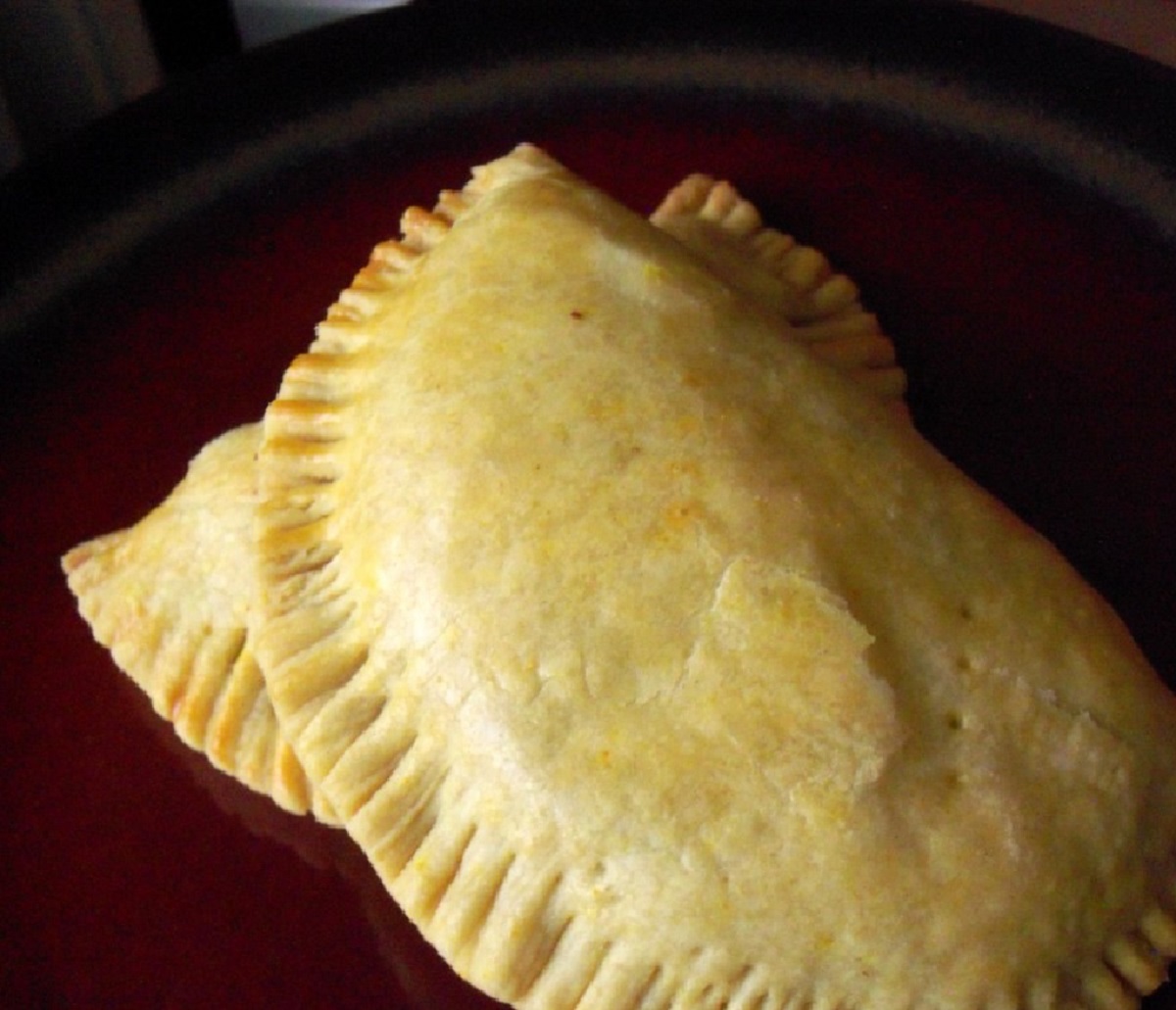 Minced beef in pastry parcels is a staple in many cuisines around the world, and Jamaican cuisines are no different! Of course, as you would expect, they are filled with delicious spices. Depending on the person making them, the recipe may change slightly. This is because they are such a traditional recipe that different Jamaican families may have their own recipe that has been handed down through generations. One thing is for sure and that is that they are a savory dish not to be missed. 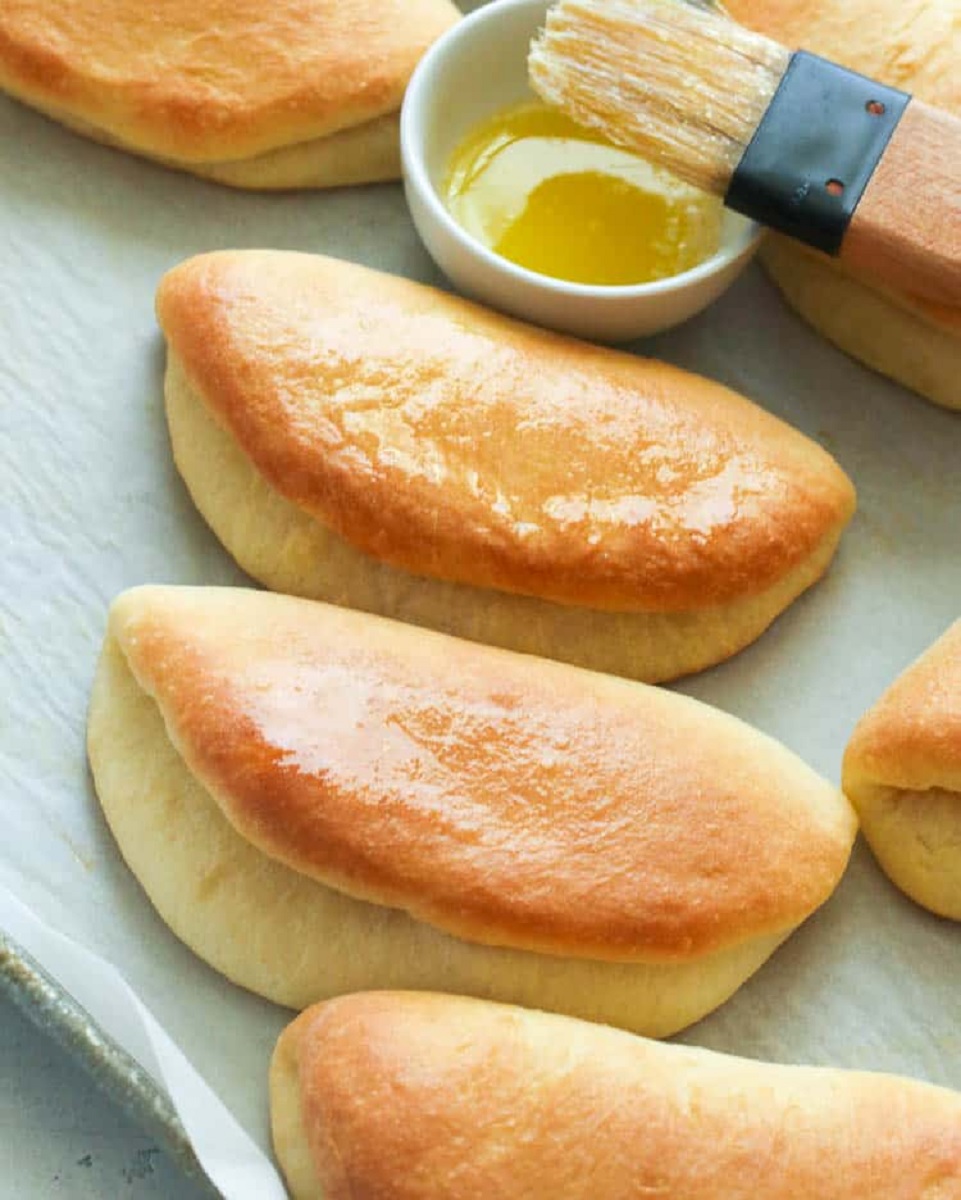 We couldn’t recommend beef patties without also recommending coco bread. Coco bread is a staple to serve alongside beef patties, but can also be used in place of regular bread for all of your bread needs (or should that be ‘kneads’?). The addition of coconut milk makes this delicious bread unmissable, thanks to the hint of sweetness. They are light and fluffy and make the ideal accompaniment for any meal, Jamaican or otherwise! They are especially tasty when they are fresh out of the oven. 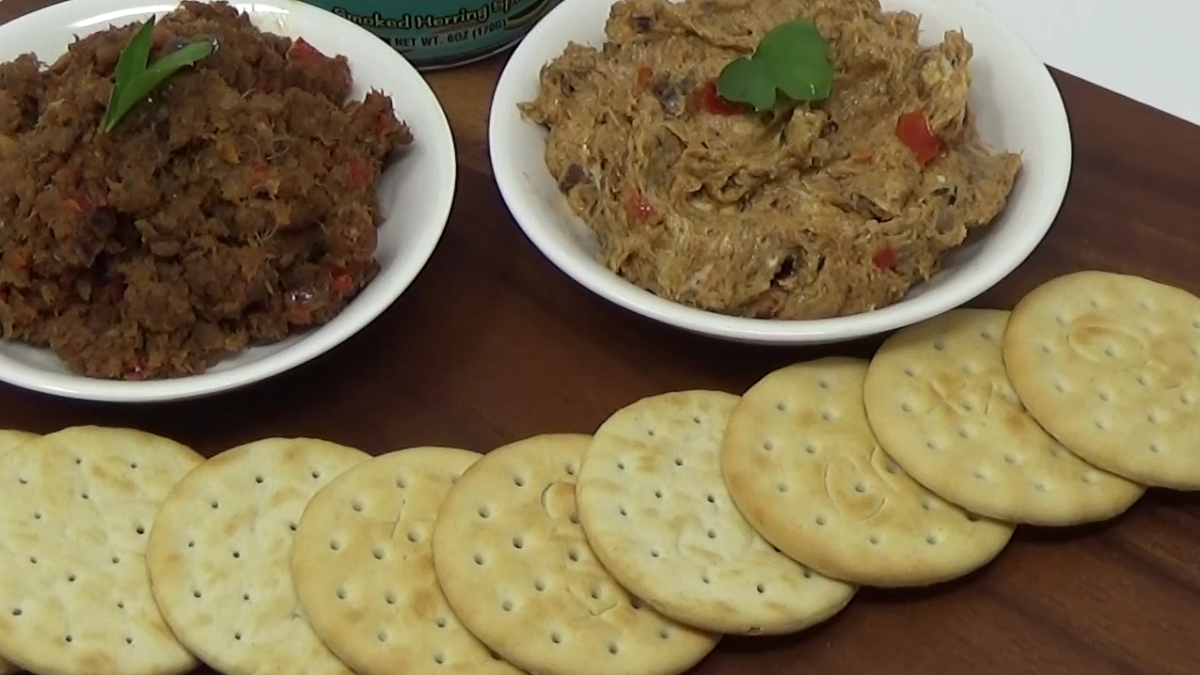 Solomon Gundy is a spread or dip that can be used on top of crackers or to dip crackers into. It is made from smoked herrings that have been chopped into small pieces and mixed with a variety of ingredients such as vinegar, onions, oil, scallions, and different herbs and spices (especially the famed Jamaican favorite, the scotch bonnet pepper)! 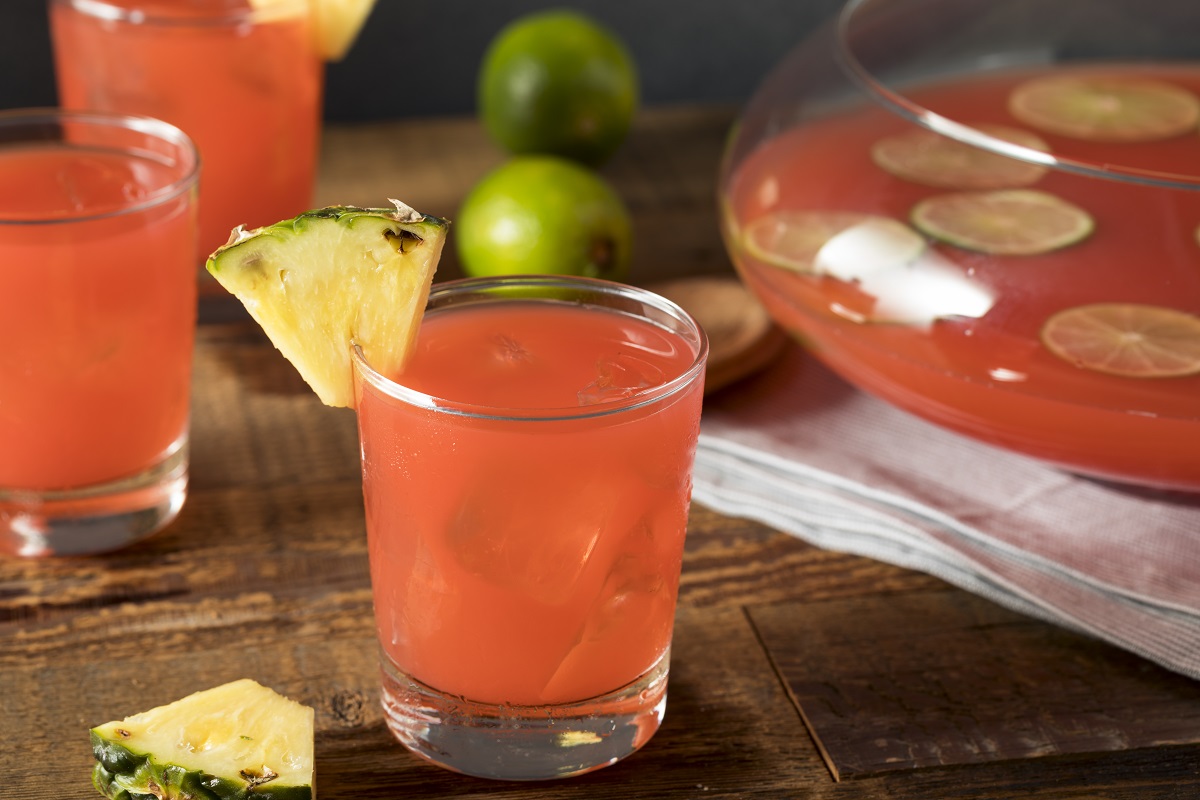 This world famous cocktail is a Jamaican special. It is made with delicious Jamaican rum, lots of exotic fruit flavors, and really packs a punch (get it?!). It has become a favorite in cocktail bars around the world, and it is really not surprising when you taste it for the first time and see how delicious it is. We don’t know whether it is a good thing or a bad thing that it goes down like soda, especially due to the volume of run that goes in it! This is sure to be a favorite at cocktail night! 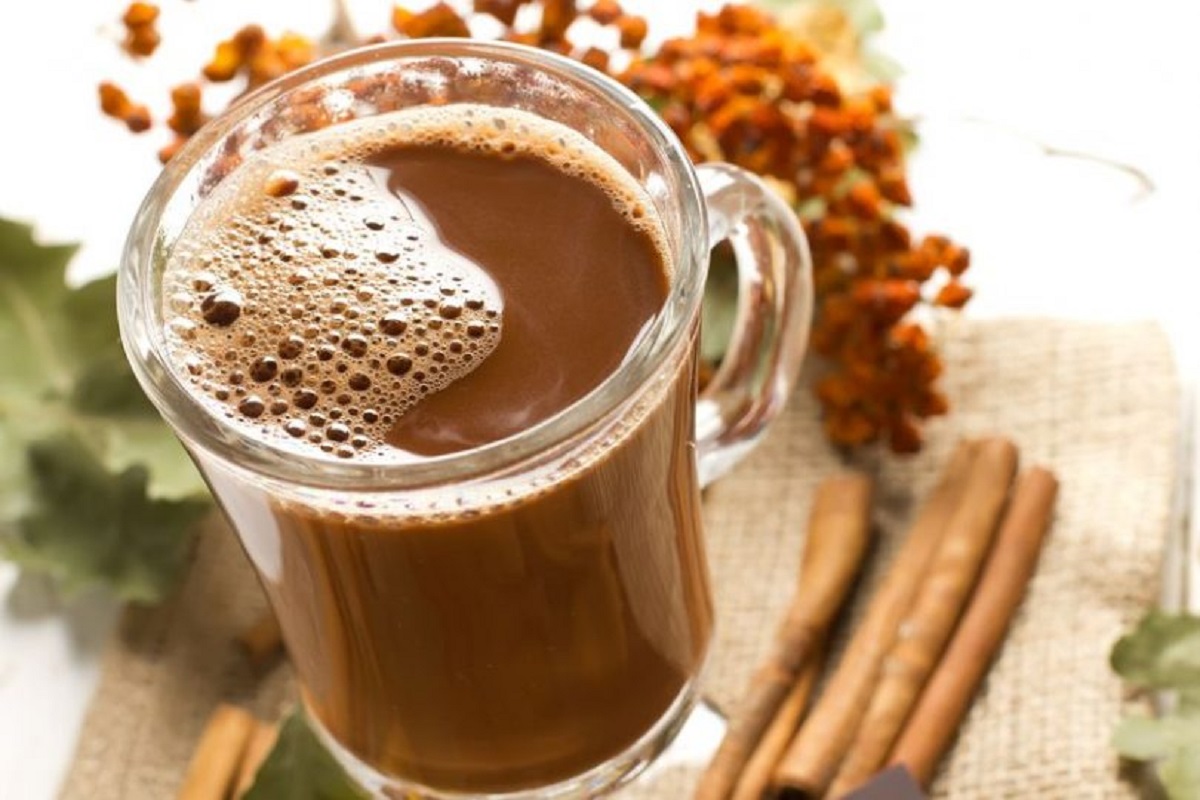 Jamaican Hot Chocolate, with its added nutmeg and cinnamon, is something I can really get behind. Imagine a normal hot chocolate but with pumpkin spice syrup added. That is what this is….but better! You will not be disappointed! Similar in taste and texture to donuts, these festivals are a favorite comfort food treat from Jamaican cuisine. They are similar to fried dumplings, but the cornmeal makes them feel and taste a little coarser. Vanilla extract and brown sugar are used to make them extra tasty. 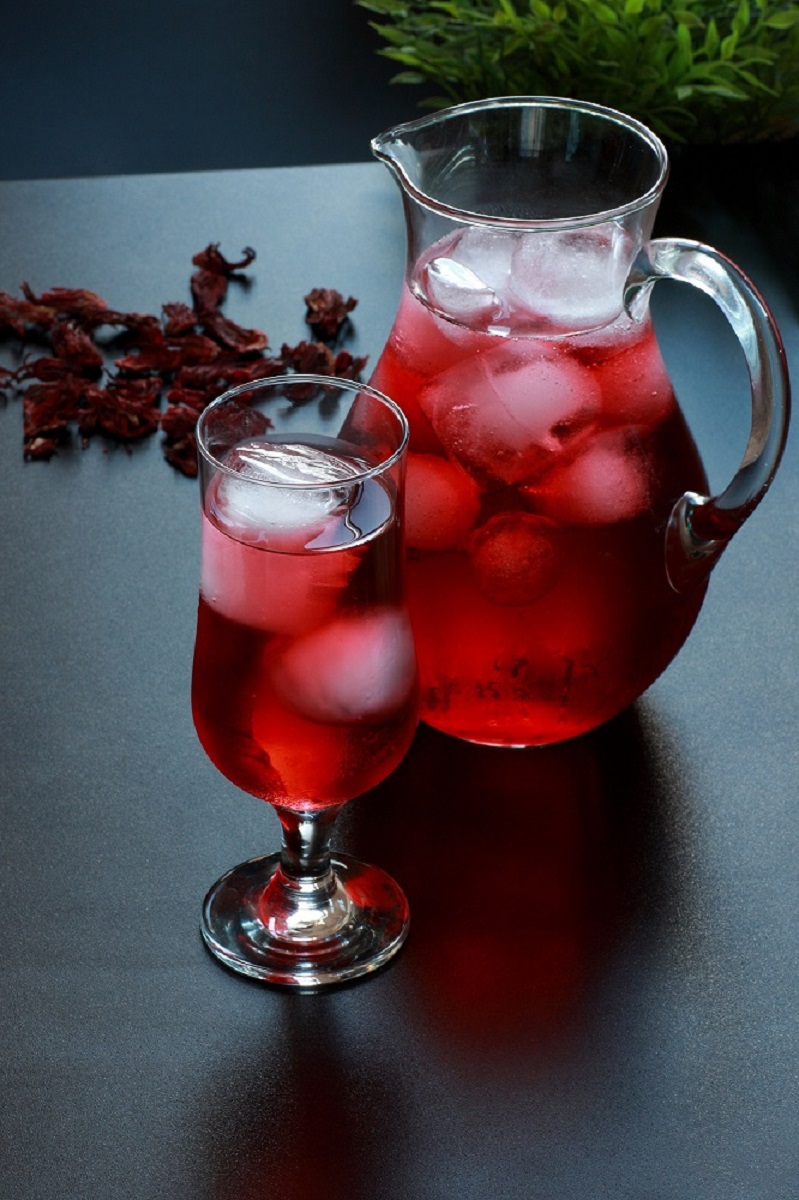 This is a drink made from hibiscus and is a staple in Jamaica at holiday times. It is very similar to hibiscus tea, and the recipe above is packed full of flavor and sweetness thanks to the added sweet spices and sugar. 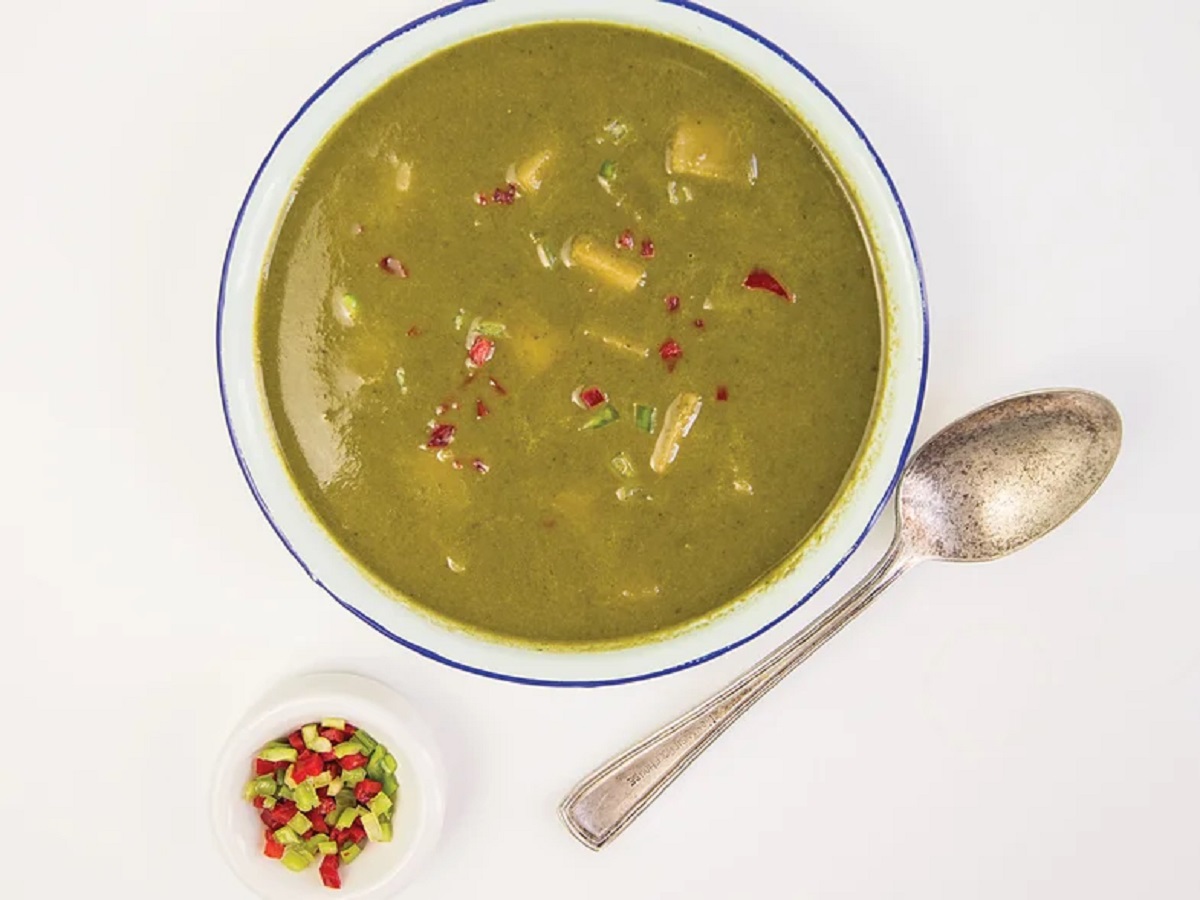 This is made from callaloo which is very similar to spinach. This warming soup is great if you are looking for a spicy kick. It is not uncommon to see Scotch bonnets being added to make it even hotter! 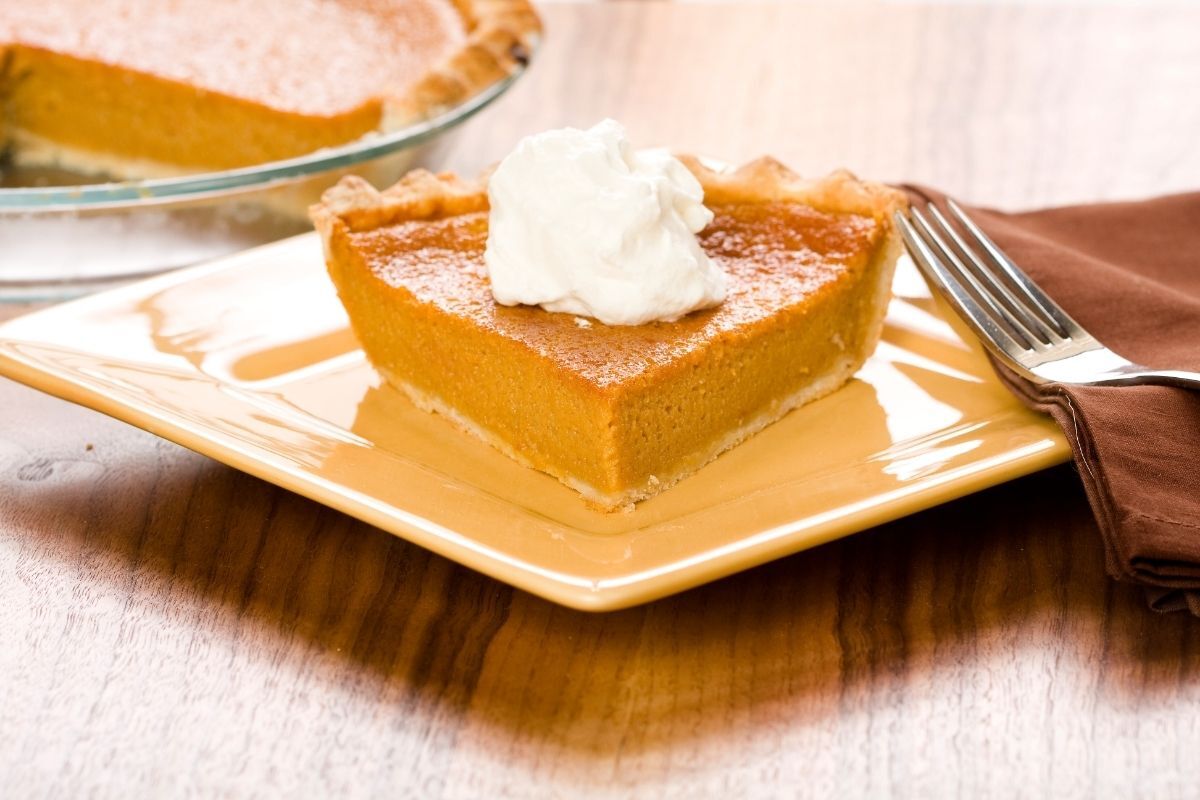 Sweet Potato Pudding. Those three words shouldn’t work, but gosh darn it, they do! The combination of simple flavors from the sweet potato (or yams if that’s what you call them) partnered with the creamy coconut milk work so well together! Puddings should always be simple. We think the tastiest puddings are the ones without frills and bells…and this one certainly does the trick! 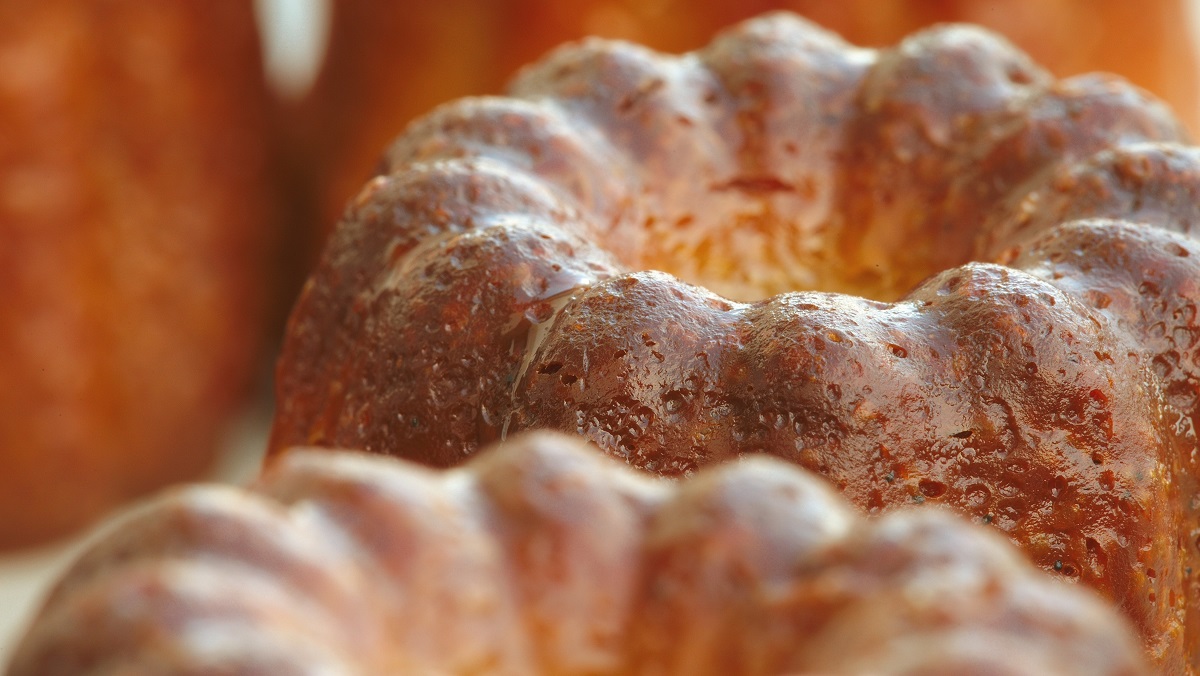 The staple alcoholic beverage of Jamaica is not limited to cocktails! Rum cake is a traditional sweet treat on the island and delivers a sweet, wanting flavor similar to that of caramel! Enjoy a slice with some Jamaican Hot Chocolate for the full experience. This is certainly going to be a favorite with rum lovers. 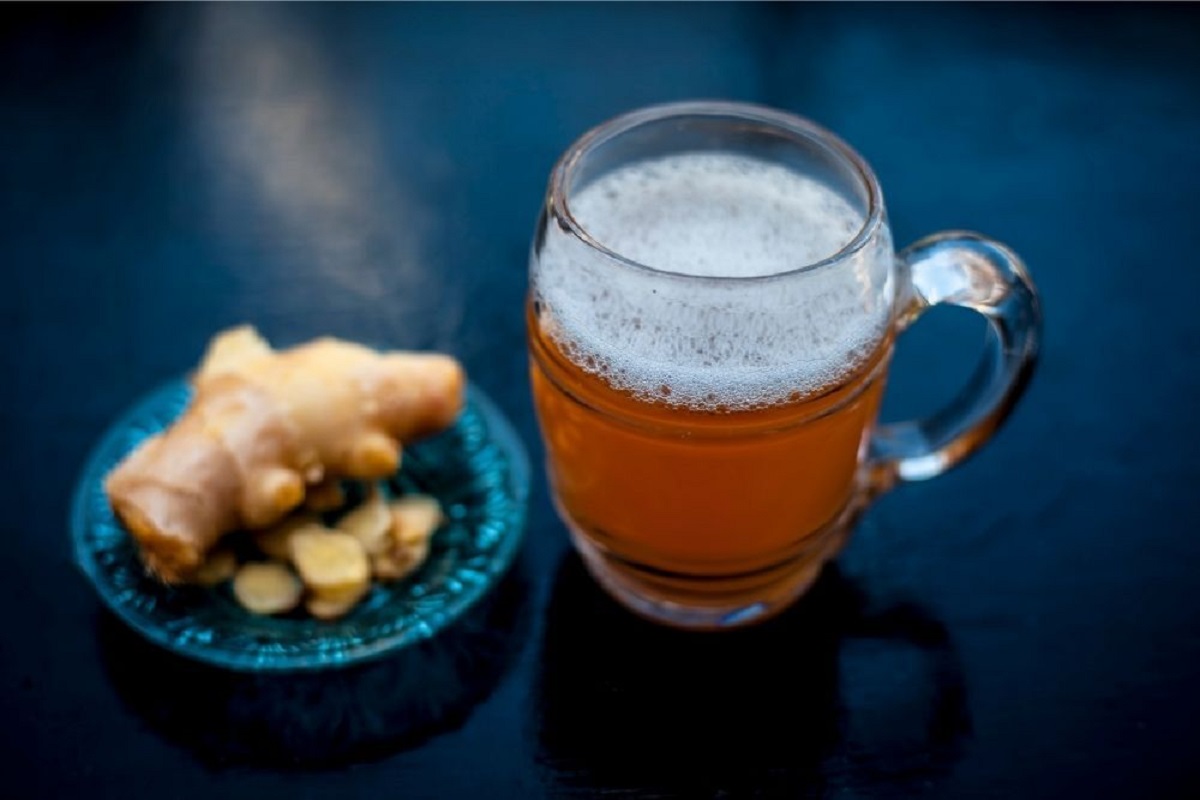 Refreshing and spicy, all at the same time! Ginger beer, whilst it is certainly not specifically Jamaican, is a very popular drink on the island. Enjoy it with ice, or add it into other dishes for some heat and zest. However you enjoy it (and enjoy it you will) you will be pleased to know that it is alcohol free, so all ages can try it! That being said, it is particularly tasty when used as a mixer for spiced rum! 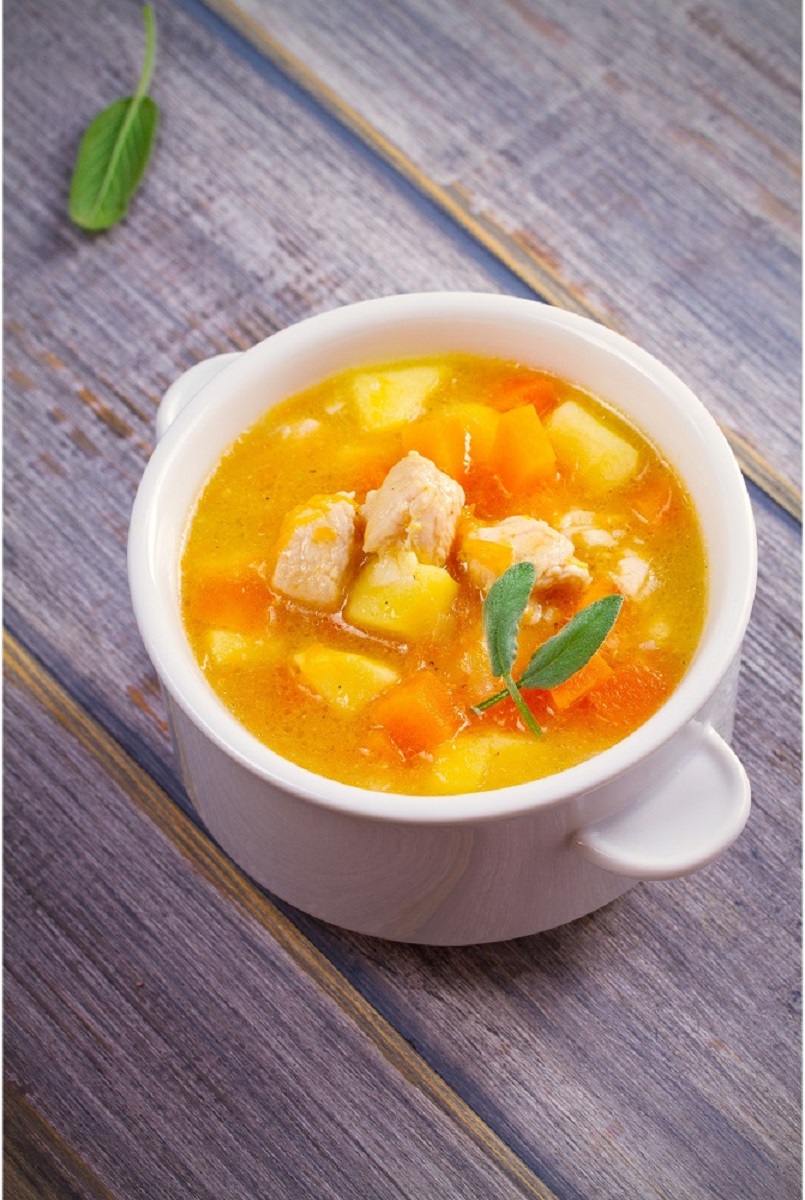 Chicken soup. A universal resounding “ahhhhh”. It is such a comfort food and is especially heartwarming when it is made in the Jamaican way. The extra added heat and spice from the Scotch Bonnet chili peppers makes it the perfect hearty meal, great for a winter warmer soup, or even in the summer if you fancy something to clear the airways! Serve with coco bread for an extra tasty Jamaican meal.